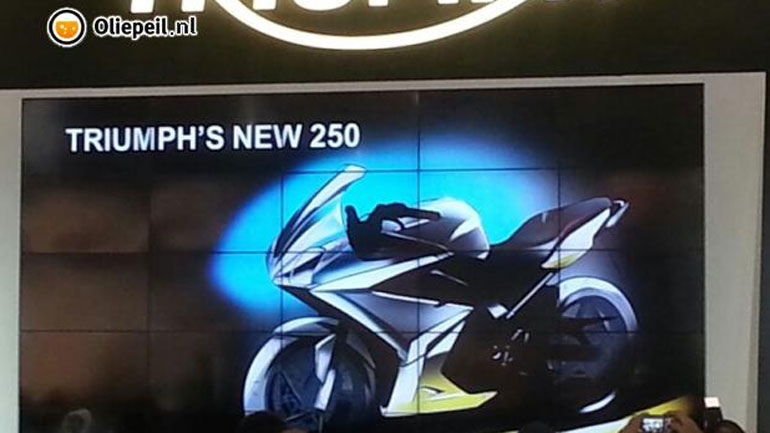 Didn’t we say we’re loving the EICMA 2013- for it has been a chamber of secrets and steadily revealing everything that has been in the hiding.

Dutch website oliepeil.nl has captured on cam Triumph Motorcycle’s plans to launch a faired new motorcycle in a 250cc capacity. Though Triumph themselves haven’t revealed the name, but the reporters of Oliepeil had the opportunity of looking at the engine and the details they have been able to fetch, hints at a new Triumph Daytona 250.

It was just a few days back since we brought you images of the entry level Triumph 250 that was spotted during testing. With a liquid cooled engine and basic specs that read steel tube frame, box section swingarm, telescopic forks, single disc braking at both ends etc- the naked 250 is being referred to as Triumph’s new entry level street bike. On similar lines, the Triumph Daytona 250 too most probably would be sporting similar specs including the single cylinder liquid cooled 250cc engine albeit in a faired package and should be offered as a premium offering in the same capacity over the naked avatar.

Similar to the street going version, the components of the Triumph Daytona 250 too would be manufactured at Triumph’s Thailand facility considering the markets it would be catering to, where bikes like the KTM Duke 200 and Honda CBR250R have been enjoying healthy sales figures. An adequate powered engine in the capacity with a decent sticker price should spell success for the British motorcycle manufacturer. Even a slight premium over its rivals wouldn’t hurt as the brand would carry that added snob factor over the others.

Expect more information to roll out from Triumph as the EICMA progresses.