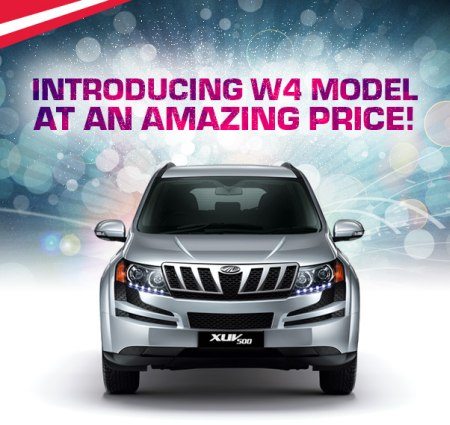 Mahindra today launched the new Mahindra XUV500 W4 variant at a starting price of INR 10.95 lakhs (ex-showroom, Delhi). The XUV500 W4 has been launched at an introductory price and is expected to become marginally pricier in a few months of time.

A price of INR 10.95 lakhs means that the new W4 variant is more than a lakh rupees cheaper than the W6 variant.

It may be noted that of late, Mahindra has been witnessing quite a slump in the sales of its flagship SUV. This could be attributed to two reasons-

The XUV500 W4 is aimed to counter both the above culprits and has been launched at just the right time- during the ongoing festive season to cash in on increased demand for new vehicles.

While the XUV500 W4 variant misses out on some of the features, it remains mechanically unchanged. This means that the car will continue to be powered by the same 140bhp 2.2 litre 4 pot diesel engine that powers the other variants. The W4 variant misses out on a touchscreen infotainment display, DVD player, tyre pressure sensor, parking assistant, rain sensing wipers and light sensing headlamps.

The good part is that the W4 variant will continue to boast of safely features such as dual airbags, and ABS with EBD. However, it doesn’t get ESP, Hill Hold and Hill Descent control.

It now remains to be seen if the new Mahindra XUV500 W4 variant, equipped with a really aggressive price tag, would be able to revive the sales performance of the Mahindra flagship.