Remember the disturbing dash-cam footage of an aircraft crashing into a fly-over? Well, it almost took a poor taxi-driver in his Volkswagen along with it. Almost. The photograph below shows the VW’s frontal leftovers, after it was clipped by the wing of the ill-fated TransAsia GE235 flight. What’s more, it also captures the moment where the driver, miraculously, is walking out visibly unscathed. 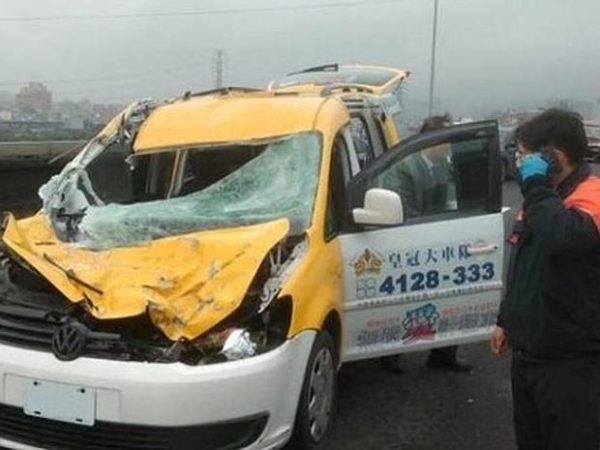 The torn remains of the VW taxi-cab after being hit, and the shocked driver walking out.

Dubbed as “the luckiest man alive” after walking away from the incident, he lives to see another day, and is trifled with a minor head injury.  The following dash-cam footage also appears to show the driver walk out and check the contents of his trunk after being clipped.

The TransAsia GE235, a Taiwanese, domestic, ATR-72 turboprop aircraft with 58 people onboard, crashed into a river on Wednesday, February 04, 2015, shortly after takeoff from Taipei. The TransAsia flight aircraft was flying from Taipei to the offshore island of Kinmen when it crashed into the Keelung River. At least 15 people have been killed and dozens injured.