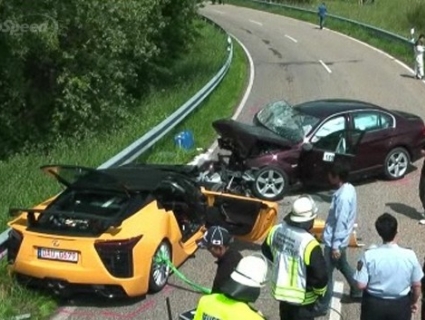 In a tragic turn of events, Toyota’s chief test driver, 67-year-old Hiromu Naruse, died in a crash on highway 410 near the famed Nürburgring race track in Germany. Known to enthusiasts as the ‘Godfather of the LFA’, Naruse-san was behind the wheel of a Lexus LFA ‘Nürburgring Edition’ prototype. Early reports say that he veered into oncoming traffic and collided head-on with a BMW which was being driven by two others test drivers. The two BMW test drivers survived the crash, though one is reportedly still in critical condition.

One of the most experienced personnel at Toyota, Naruse-san was involved in the development of  many successful cars like the Toyota 2000GT,the AE-86 Tueno, the MR-2, the Supra and the LFA itself, to name a few. His death will not only be mourned by his family and friends, but by the entire automotive fraternity.

A video of the crash site as found on the internet: