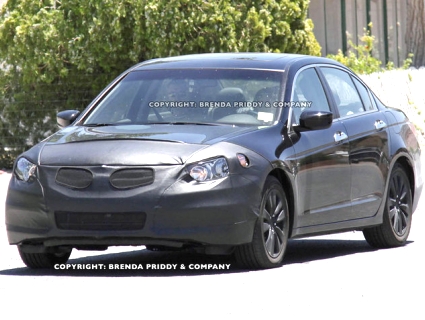 The spy-photographers Brenda Priddy & Company have caught the new Accord on test in the United States. Since the Accord sold in the States is the same one sold in India, we expect the facelifted model (caught on test) to make it to India as well. As you can see in the photos, there is minimal camouflage on the tail end of the car which suggests that the tailgate won’t have many changes. The front however is has been hidden from the public. The bumper is expected to get a few tweaks and a revised design for the fog-lamps. We are expecting a new chrome-lined grille, similar either to the one on the Honda Odessey minivan which was recently unveiled in the US or the Honda Accord Crosstour. Refer to the images below:

The new Accord is also slated to get some tweaks to the interiors with addition of some new gadgetry.  Honda may also add the new 6-speed transmission to the Accord V6 VCM. For India, we are expect the upcoming diesel version of the Accord to be launched with the new fascia that has been spied here. The Accord facelift is expected to go on sale in the US by October 2010, expect a similar Q4 2010 launch for the facelift and the diesel variant for the Indian market. This Accord would be a stop-gap arrangement until the all-new 2013 Accord (ninth generation) is ready. We expect the 2013 Accord to be unveiled at the 2012 Auto Expo.