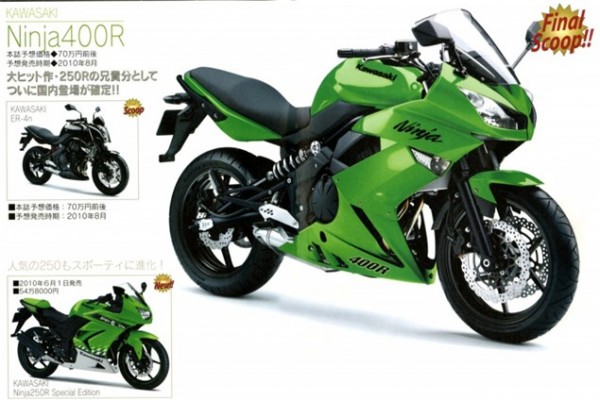 Visrodown reports that a Japanese magazine has revealed the images of the upcoming ER-4f, ER-4n and 250R special edition bikes (to be officially unveiled by Kawasaki soon). Now that’s a big news to us, as a 400cc bike like the ER-4f makes enormous sense for India, and knowing that Kawasaki has recently created a fully owned subsidiary in the country, the chances of the bike coming to India are very high. Of late, we have also read reports on some of the blogs that the company is planning to bring the ER-6F to India at an extremely lucrative price. That should give an even bigger incentive to Kawasaki to bring the newly revealed smaller sibling here which not only makes more sense in the Indian road and traffic conditions, but will offer a substantial advantage in terms of price as well.
Sporting an all new 400cc Parallel twin engine which can safely be expected to produce slightly more than 60bhp, the bike will be an instant hit among the tourers and sportbiking lovers alike. The ER-6F has received great reviews from journalists across the world for being an all-round performer and for its nice balance between handling and ease to ride. The ER-4f will share the majority of its components with its bigger sibling as it will produce only slightly less power (owing to a brand new engine), and resultantly its handling traits as well.
We don’t have much clue about the power output and other specifications of the three bikes, and more details are awaited. However, we are damn sure that these two 400cc bikes will turn out to be big cash cows for Kawasaki knowing that there aren’t any good 400s around internationally, and there definitely is a market for such bikes – especially with the westerners realizing the lack of practicality of big bore machines. Delightful news, Kawasaki – keep it up!