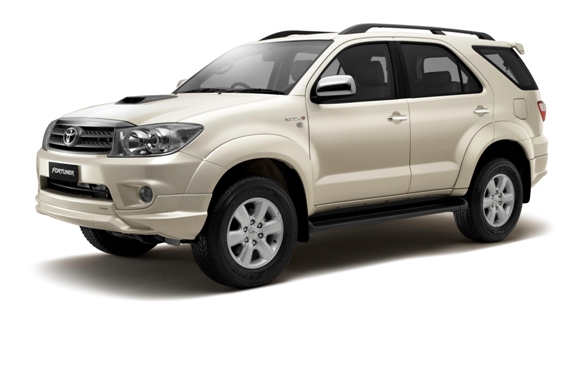 It’s been exactly one year since the much loved burly SUV from Toyota stables was introduced to our country. The brawny machine has been flying off the Toyota showrooms ever since, with 10,000 units already on the road. To commemorate the first anniversary of the bestseller SUV in its class, Toyota Kirloskar Motor has announced the introduction of the ‘Fortuner Anniversary Edition”. Toyota claims that the Fortuner commands close to 60 percent share in the segment it resides in – now that’s a mighty share in today’s tough times leaders like Suzuki are slipping every day owing to pressure from new carmakers.

The anniversary edition will have an ‘enhanced sporty exterior’ and will be available only in Pearl White colour. Some cosmetic treatment has also been given to the SUV – changes like a Front Bumper Spoiler, Rear Roof Spoiler and Rear Bumper Spoiler all in body colour, and a chrome plated Muffler Cutter have been incorporated. The Fortuner Anniversary Edition has been priced at Rs. 20,45,000 ex-showroom Delhi. Only 250 units of this special edition Fortuner will be made.

Mr. Sandeep Singh, Deputy Managing Director-Marketing, Toyota Kirloskar Motor said, “Today, as we celebrate both the first anniversary and the milestone of selling 10,000 units, we are delighted to introduce the Anniversary Edition of the Fortuner which will be made available exclusively to our customers who have already made bookings with us. We would like to thank our customers for making the Fortuner the market leader in its segment, since its launch. I would also like to take this opportunity to acknowledge and thank those customers who have waited patiently through the waiting periods because of the overwhelming response that we have received. It is our endeavour to clear the present backlog, as well as meet growing customer requirement.”