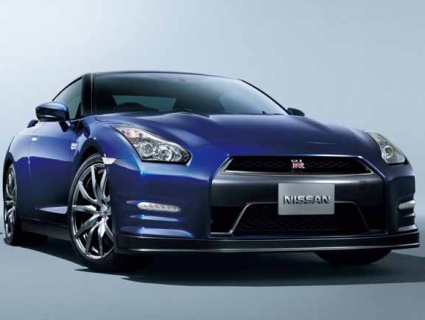 The members at the GTRBlog.com community have laid their hands on the images of the 2012 Nissan GT-R. The new car, which was caught testing a few weeks back can now be seen without any camouflage, thanks to these brochure images that have leaked onto the internet.

The 2012 GT-R features very subtle changes. The new car gets LED daytime running lights which are incorporated in the corners of the slightly restyled front bumper. These changes are said to reduce the drag coefficient of the GT-R from 0.272 to 0.268. The rear bumper gets some styling tweaks too and incorporates a diffuser for a 10% increase in the downforce. There’s also a low mounted brake light (refer to the images). The car gets new wheels from Rays which are reduce the unsprung weight of the car by 3 Kgs. The car is lighter by almost 12 kilos – impressive ain’t it? The 2012 model also brings two new colours – Hyper Blue Black and Hyper Titanium for the wheels and Aurora Flare Blue Pearl and Nebula Opal Black for the car.