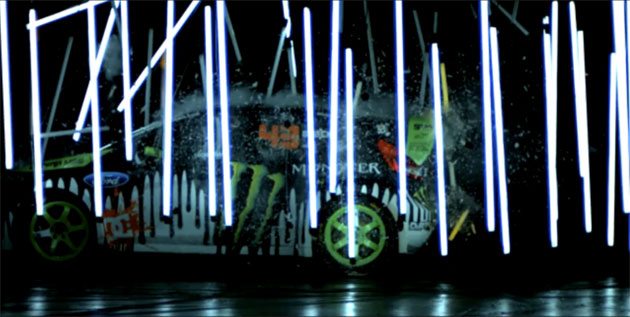 After Ken Block’s Gymkhana 1, 2 and 2.1 videos, we could hardly wait for the third set, and boy, are we disappointed! Not, cause its sucks, but because the Part One is apparently just a music video! And we and million others were hoping to watch the insane drift stunts which had slurped awesomeness in the previous three videos.

But sadly, what we have here is a music video with the longest title ever, “Ken Block’s Gymkhana THREE, Part 1; The Music Video Infomercial (feat. The Cool Kids)” with Ken Block looking hard and The Cool Kids rapping in the background while blowing the krypton out of some fluorescent lamps. The music video itself is not as bad, but just a lil head’s up was needed. Saying that Gymkhana 3 is out, almost made us burst like one of those leon lamps in the video.

The good news is that we’ve been promised by the Monster Rally Team/ DC Shoes high command that part two and three will indeed include more of the actual Gymkhana, which is due to be released in mid- September.

“In planning Gymkhana THREE, we looked into what made the previous videos so successful and decided that in order to one up the best parts from each, we would need to break Gym3 into more than one video,” said Ken Block. “Gymkhana THREE: Part 1 builds on the slick, high production aesthetic of Gymkhana TWO, The Infomercial, by actually taking this concept to the next level in creating a full blown music video with the help of hip-hop duo The Cool Kids.”

This music video is packed with everything that people have come to expect from the Gymkhana videos but taken up a notch. Look for Ken, his Gymkhana THREE 2011 Ford Fiesta, Gymkhana style driving, new DC x KB product, insane visuals and stunts – all set to an original track, “Clicking (Gymkhana THREE)” that was written and produced by hip-hop duo The Cool Kids exclusively for Gym 3: Part 1. The video, which was shot over 48 hours in studio in Los Angeles, CA, was directed by acclaimed music video director, Bryan Barber, who has worked with music icons including Jay-Z, Justin Timberlake, Lil Wayne, and Beyonce.

“This was one of the coolest projects we’ve been a part of,” said Mikey Rock and Chuck Inglish of The Cool Kids. “It was inspiring to get to work with Ken and the director Bryan. The stunts and action in the video were so exciting, definitely not something we have done before.”

“Filming The Music Video Infomercial was super fun,” said Ken. “Working with The Cool Kids was surreal, I never thought I would be co-starring in an over-the-top music video. But, the next part is where the real fun begins for me.”

Making their debut in the Gym3: Part 1 video are Ken’s newest DC apparel, footwear and accessories pieces, some of which were developed exclusively for the Gymkhana THREE Project. Inspired by the livery and colors of Ken’s Gymkhana THREE 2011 Ford Fiesta the products incorporate the drip paint pattern and Ken’s signature “Block” lettering and # 43 graphic. New products specifically highlighted in the video include three footwear styles; the Block Spartan Hi WC, Block Pure, and the Pro Spec 2.0 Mid and three apparel pieces; a windbreaker, a zip-up sweatshirt, and a t-shirt. Fans can check out all of Ken’s products on DC’s website where they’ll also find accessories like a hat and beanie, as well as women’s and kids shirts.

To date Ken Block’s series of Gymkhana videos have had more than 70 million views virally. Gymkhana TWO earned a Bronze Pencil at the One Show Entertainment Awards in the “Online Branded Entertainment” category and was #4 on Ad Age’s list of top viral videos of 2009. Most recently Gymkhana TWO won a 2010 People’s Telly Silver Award, presented by YouTube.

For behind the scenes photos and info on Gym3: Part 1, to watch the previous Gymkhana videos, and to check out Ken’s DC products visit https://www.dcshoes.com/gym3. “Clicking (Gymkhana THREE)” by The Cool Kids is available to purchase on iTunes beginning today as well. Look for Gym 3: Part 2 to drop in early Fall 2010.

Founded by Ken Block and Damon Way in 1993, DC quickly grew to a leader in performance skateboarding shoes and renowned action sports brand. Today DC stands as a global brand whose product line has expanded to include men’s, women’s and kids’ skateboarding and lifestyle shoes, apparel, snowboards, snowboard boots, outerwear, and accessories.

As one of the cornerstones of its marketing strategy, DC has built a world-class team of professional skateboarding, snowboarding, surfing, BMX, motocross and rally athletes that exemplify and enhance DC’s brand, develop its signature products, and support its promotional efforts. DC is a subsidiary of Quiksilver, Inc.

Ken Block’s rally career began in 2005. His skill and car control became quickly apparent and Block aptly nabbed Rookie of the Year in the Rally America Championship. Since then, Block has continued to race in the series, boasting a healthy number of podium appearances, as well as X Games medals. In addition to his performance in the car, Block has been a driving force in shedding light on the sport within the United States. Block co-founded DC Shoes, a worldwide leader in performance skateboarding shoes and a renowned action sports brand. His keen branding and marketing acumen not only elevated DC to their current eminent status, but has allowed Block to achieve global fame as a national rally driver through his wildly successful viral video campaigns. Ad Age named his “Gymkhana TWO” the No. 4 Viral Video of 2009. In January 2010, Block signed with Ford Motor Company to campaign both the Rally America series and the World Rally Championship, being the first American to do so.