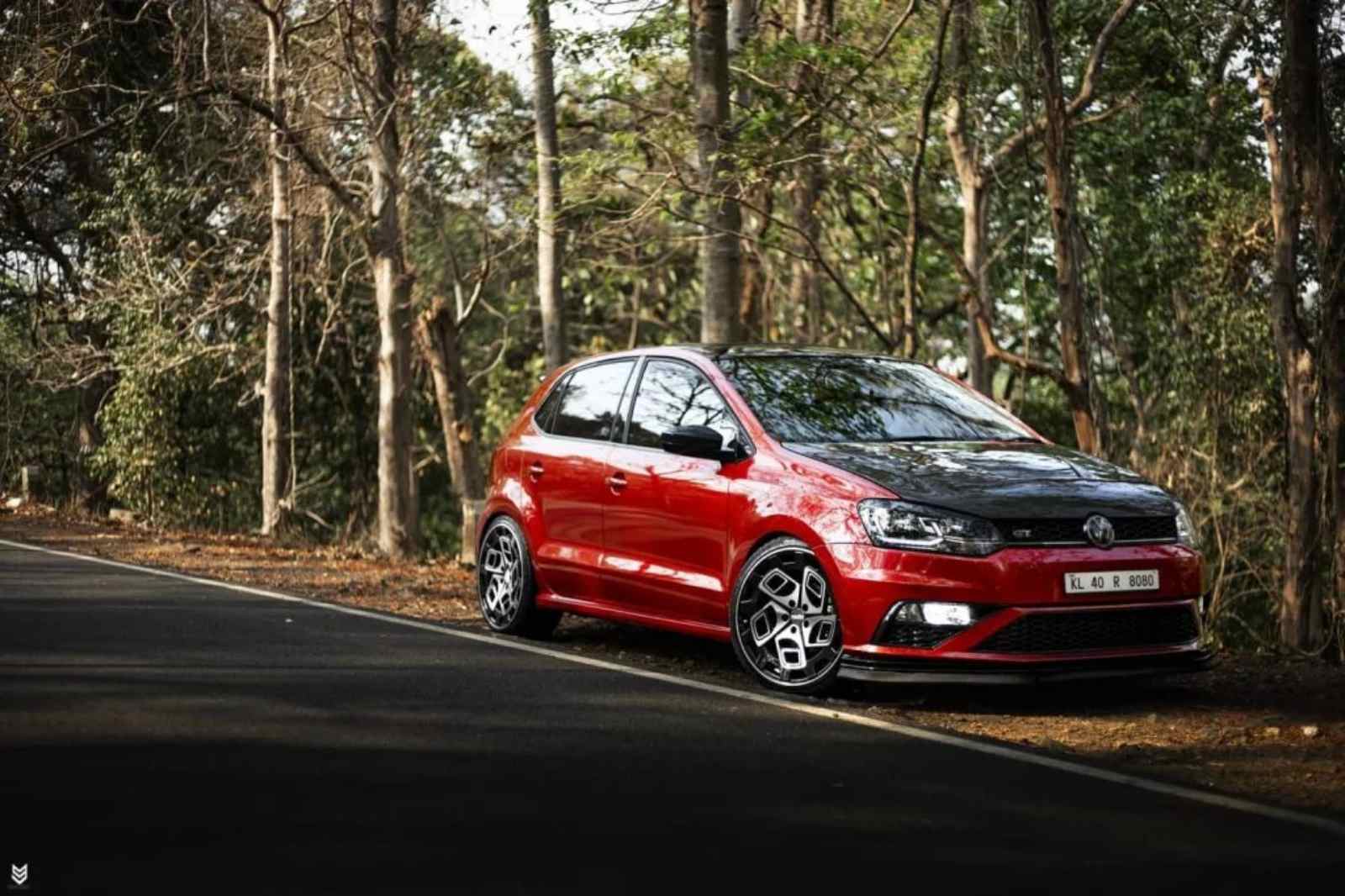 The Volkswagen Polo GT has always been a performance-oriented hatchback from the beginning, one of the few in India in fact.

Over the years, we have seen quite a few after-market modifications of the Polo with enthusiasts trying to make it more fun on the outside as it is inside in the driver’s seat. Here, we have an example of a Polo GT with a TSI engine that has the ability to breathe fire.

Upgrades on the Exterior 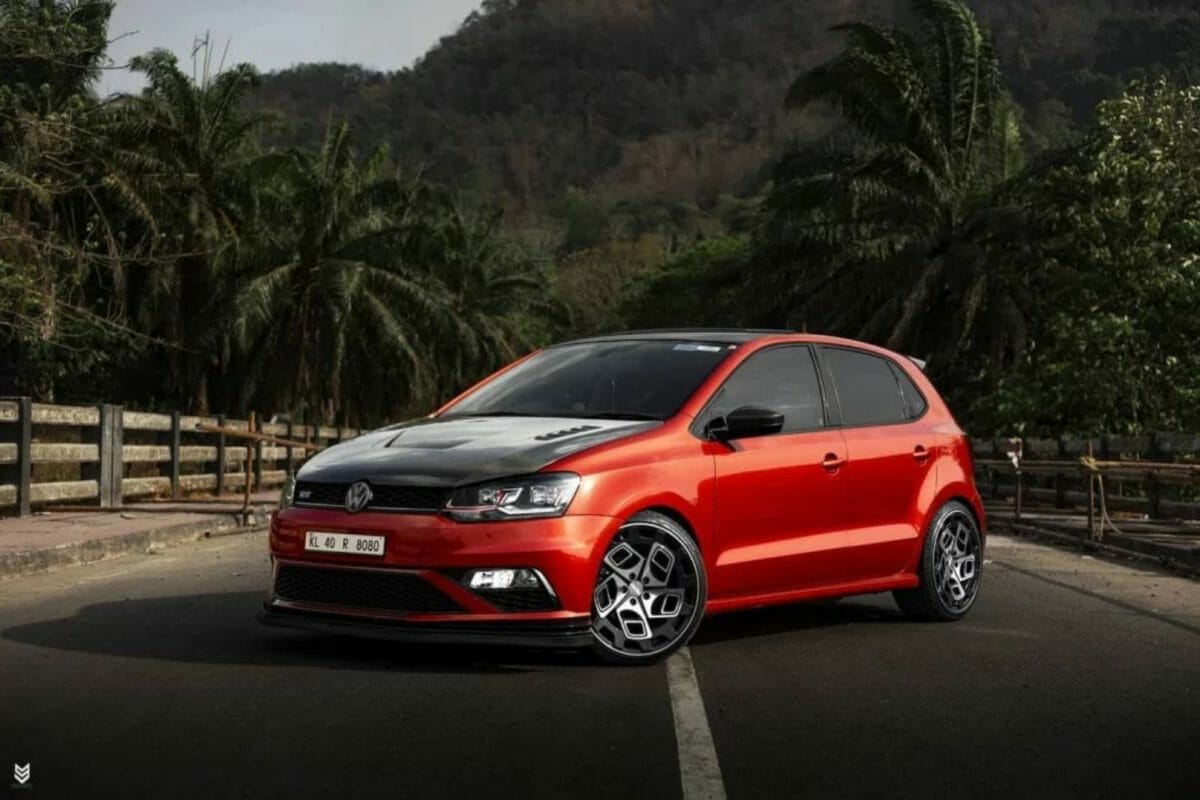 This modified Polo GT is from Thrissur in Kerala, India’s leading modification hub. From the onset, the Polo looks heavily modified from the outside as well as under the hood and the list is rather long. On the outside, this modified Volkswagen Polo comes in the Sunset red colour which was recently introduced with the facelift last year. Further, it gets a custom front lip, carbon fiber bonnet and other parts, GTI-styled headlamps and air vents on the bonnet.

Additionally, the standard 15-inch tyres in the stock unit are replaced by massive 18-inch 8.5aj Radi8 Rims with Accelera Sigma tyres which look bold, intimidating and out of the world. At the back, it gets a carbon-fiber roof spoiler and Custom Rear Diffuser. The hot hatch look is completed by Webasto Sunroof, which sadly, cannot be noticed. Also, the bonnet is completely blacked out which is frighteningly complemented by the super-bright xenon GTI headlamps.

Now coming to the performance, the modified and re-tuned engine will blow everybody’s mind. To begin with, this Polo produces close to 140 horses from its turbocharged petrol motor which is about 35 bhp more than a standard Polo. This much increase in power for a hatchback makes a hell of a difference. Its ECU has been re-mapped with a Stage 1 Remapping with the help of Wolf Moto Remap.

The stock air filter has been chucked out to make way for a BMC Carbon Dynamic Airbox that sucks in the fresh cold air right from the front of the car and feeds the turbocharger with hardly any restriction. To match that smooth intake, the exhaust has been modified as well. It features a custom-made exhaust system with a dual-tip muffler and A Valve-tronic Unit from Grid7 Custom. The sound of it can be witnessed from the video above.

Now we know that as the power graph goes higher, the need for more control also becomes equally important. The way this Polo performs with its performance mods, the stock suspension was way too soft to do justice to it. With that said, it was attended by upgrading the suspension fully-adjustable KW Street Comfort Line coil-overs. One can throw this car into a corner at a higher speed and there will hardly be any roll felt as the car remains planted on the desired line at all times. 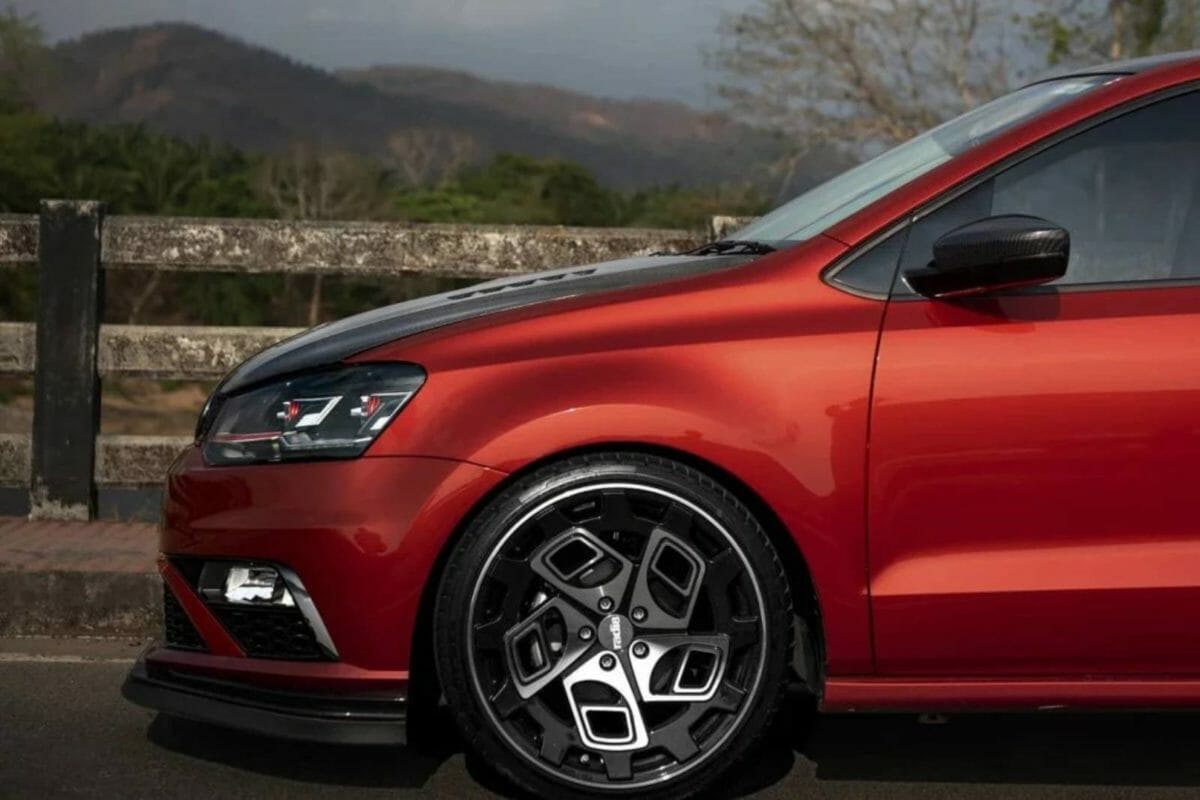 Another notable upgrade in this Polo is the addition of the GTI steering wheel and the paddle shifters complementing the automatic gearbox. The combination of the two will make any enthusiast drool over and eager to get inside this small quick creature. Other notable upgrades it gets are a custom front lip, a carbon fiber bonnet with air vents on it.

Also READ: Modifications On This Royal Enfield Continental GT 650 Cost As Much As The Bike

The Volkswagen Polo in the BS6 era has replaced the 1.2-litre TSI petrol unit with a smaller but more capable 1.0-litre TSI unit which churns out a 109 bhp of power and 175 Nm of peak torque. This impressive engine also makes its presence felt in the updated Volkswagen Vento and Skoda Rapid.