A sports car which has been the benchmark for the segment, for decades, is still at it. The Porsche 911’s eight generation was unveiled just weeks ago, and now, they’ve revealed one which isn’t shy of going topless. The new 911 Cabriolet falls in line with a long tradition, established when Porsche unveiled the prototype of the first 911 Cabriolet in September 1981. 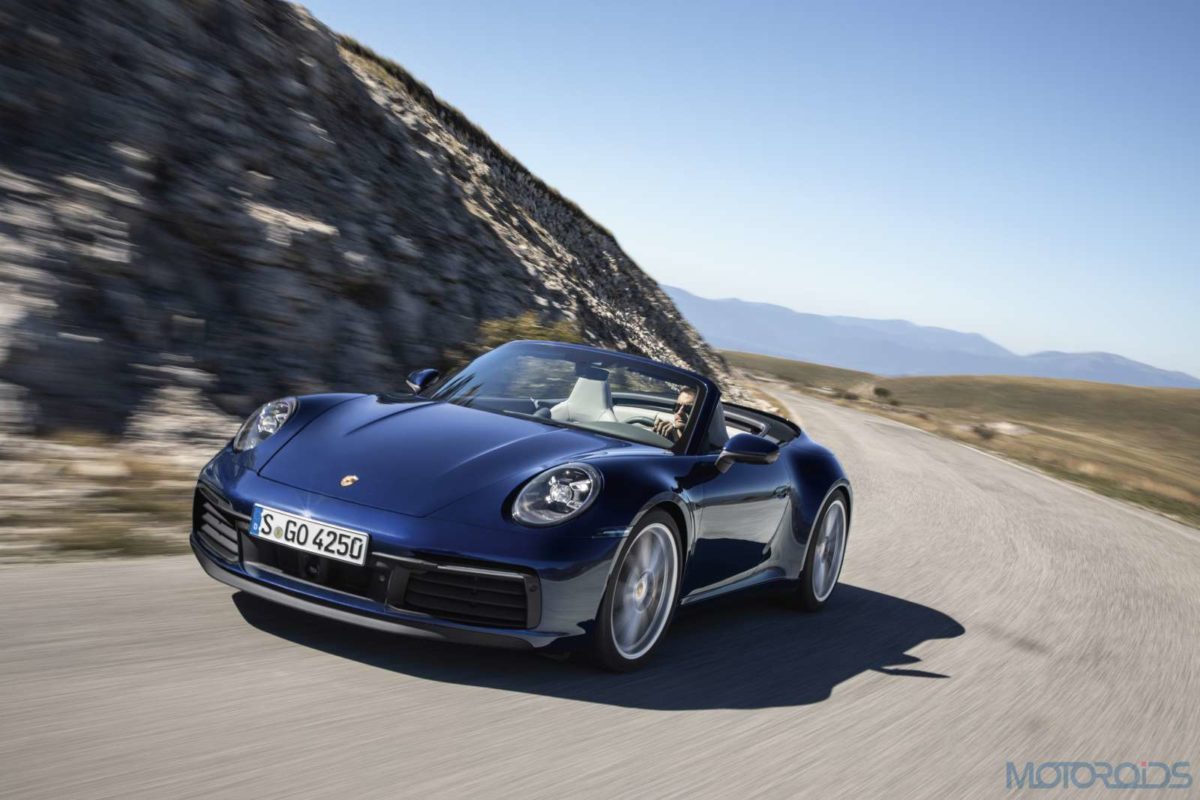 To be initially available as the 911 Carrera S Cabriolet, the soft-top version includes all the innovative features of the Coupe, along with convertible-specific elements which allow for opening and closing the roof quicker than ever before. The fully automatic soft top has an integrated glass rear window and its structure contains magnesium surface elements known as bows, which prevent ballooning of the roof at high speeds. The roof can be opened or closed at speeds of up to 50 km/h, with an opening time of around twelve seconds. An electrically extendable wind deflector ensures your neck isn’t troubled by an invisible force at high speeds. 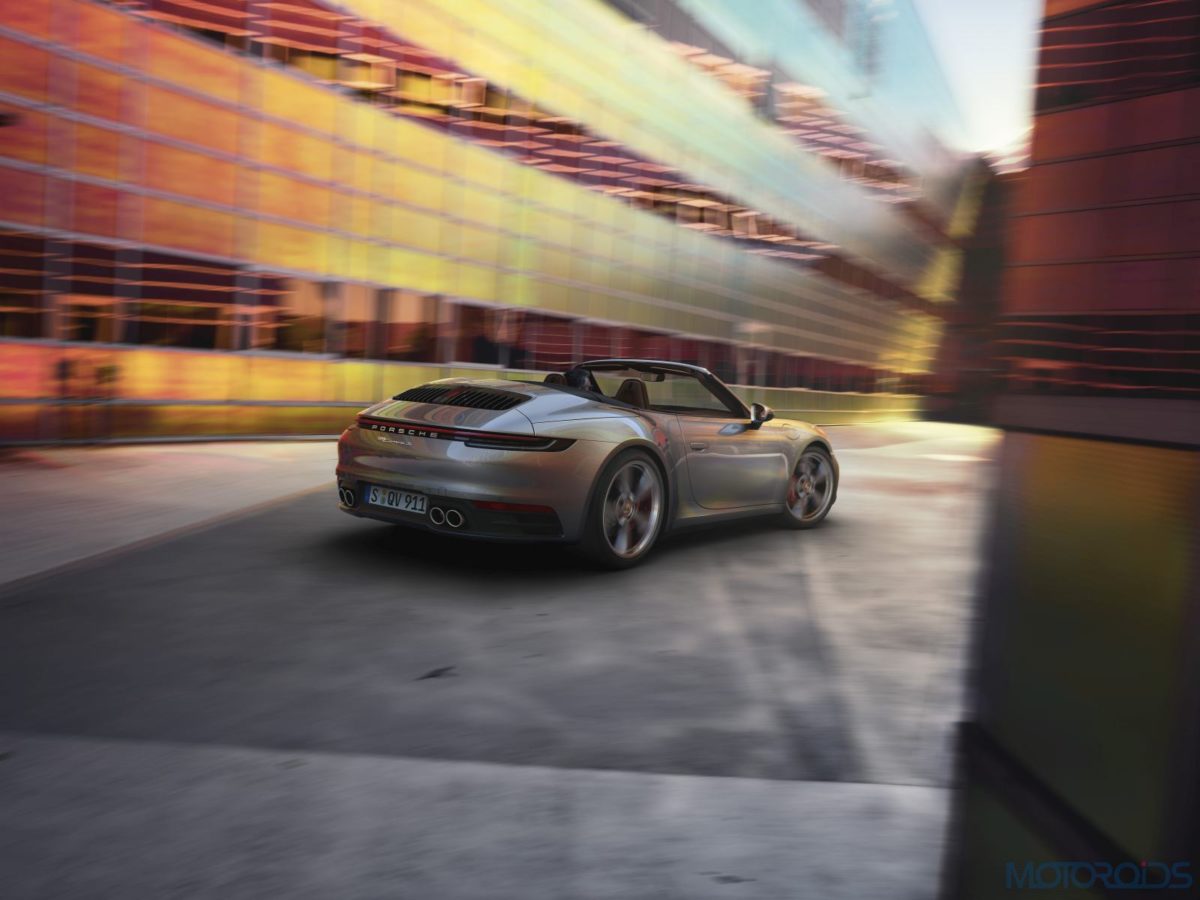 The new 911 Carrera S Cabriolet continues to be rear-wheel drive and is powered by a 2,981 cc six-cylinder boxer engine which cranks out 450 hp at 6,500 rpm and 530 Nm of torque between 2,300 and 5,000 rpm. All that power is delivered by a newly developed eight-speed dual-clutch transmission. The 911 Carrera S Cabriolet accelerates from zero to 100 km/h in 3.9 seconds (with optional Sport Chrono Package: 3.7 seconds) and can reach speeds of up to 306 km/h. 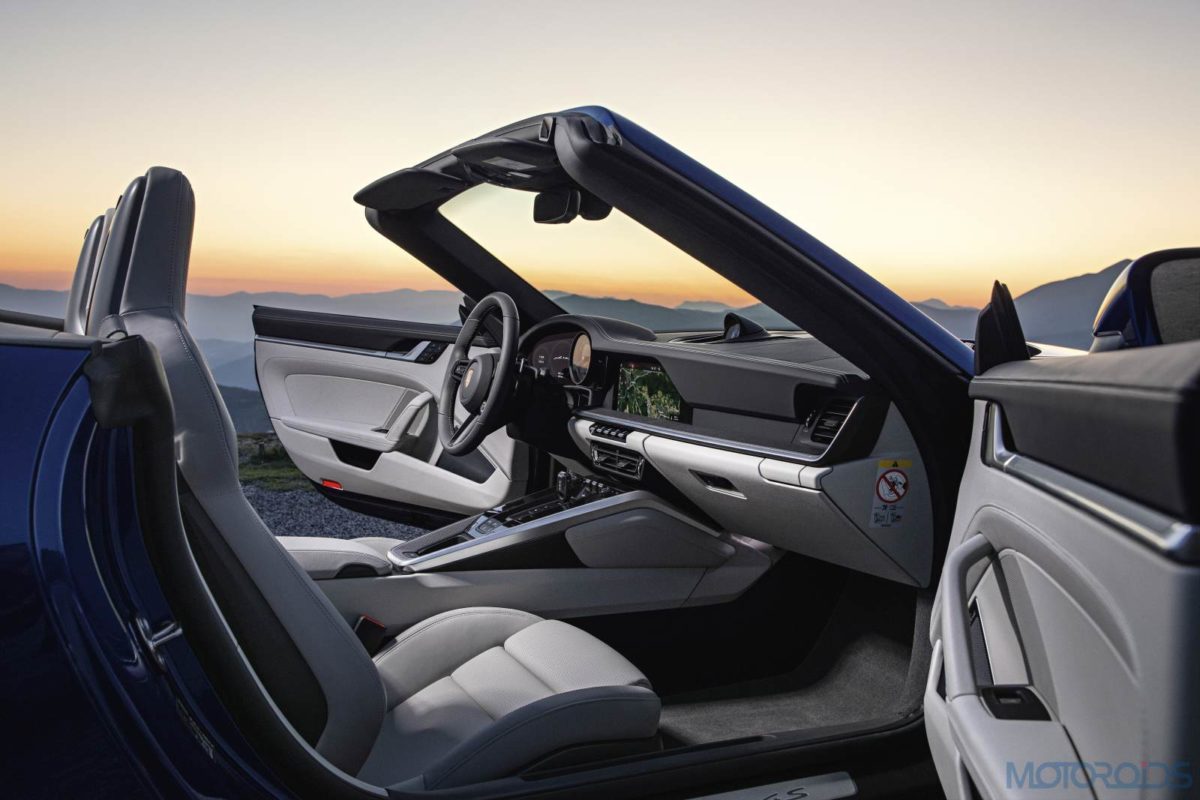 In terms of technology, a new engine mounting position makes the convertible more torsionally rigid than its predecessor. For the first time, Porsche Active Suspension Management (PASM) sport chassis is available for the 911 Cabriolet. The front and rear anti-roll-bars are more rigid, while the chassis sits 10-millimetres lower than the predecessor.

The timeless appearance is accentuated by wider wings arches over the large 20-inch wheels at the front and 21-inch wheels at the rear. The rear axle has grown by 44 millimetres, whilst the 45-millimetres wider front end revives a traditional feature from earlier 911 generations: a forward-extended bonnet with a distinctive recess in front of the windscreen. With the exception of the front and rear sections, the entire outer skin is now made from aluminium. 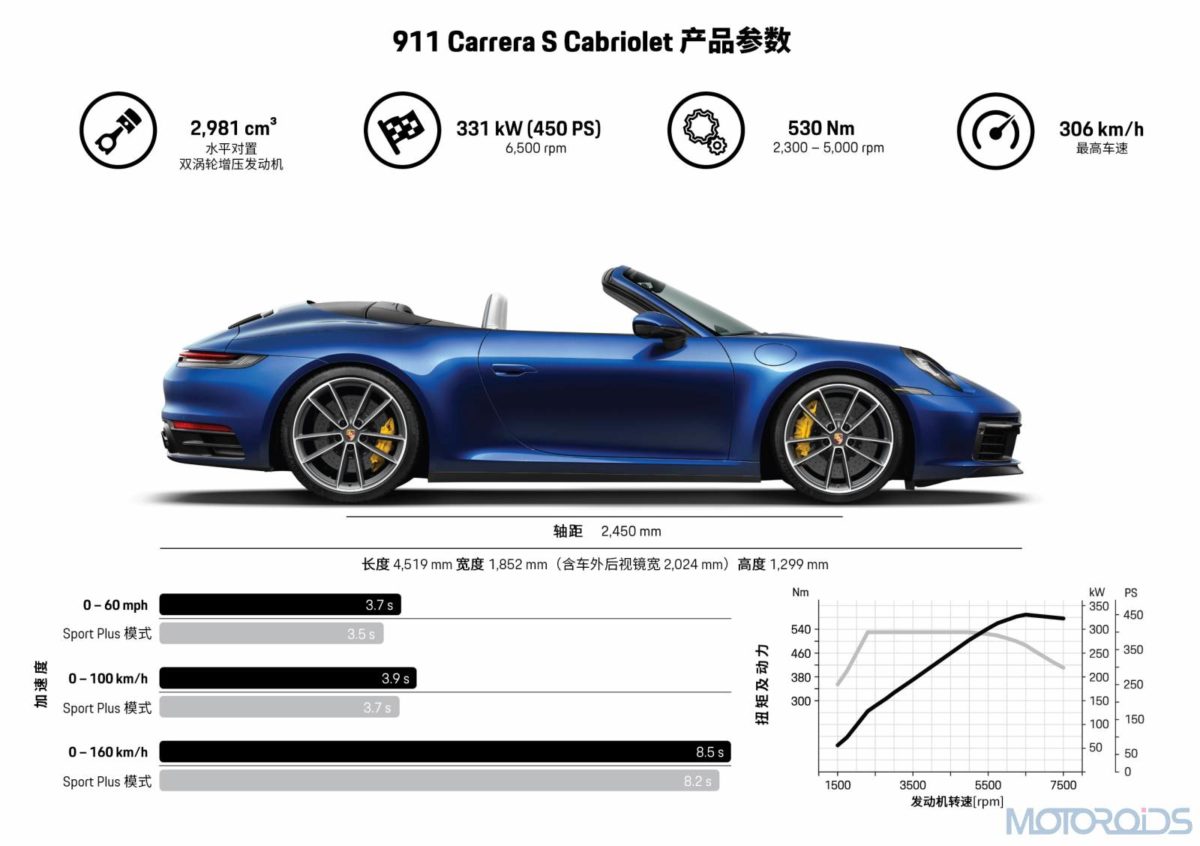 Paying homage to the original 911, the new dashboard covers the entire width between two horizontal wing levels. Alongside the centrally positioned rev counter, two thin, frame less, free form displays deliver information to the driver. The centre screen is now 10.9 inches in size allowing for quick operation without causing distraction. Like the coupe, the Cabrio gets a Wet Mode too as standard.

A camera-based warning and brake assist system is fitted as standard and detects the risk of collision with vehicles, pedestrians, or cyclists, and initiates a warning or emergency braking procedure if necessary. A Park Assistant system, including reversing camera, completes the standard configuration of the convertible. Options for the 911 include Night Vision Assist, with thermal imaging camera, as well as adaptive cruise control with automatic distance control, stop-and-go function and reversible occupant protection.