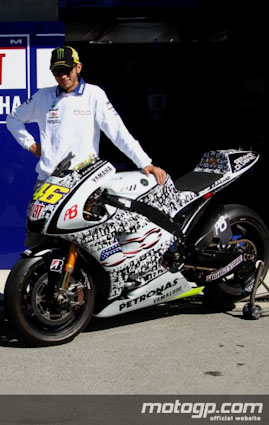 History repeats itself and it indeed has!

Most of the Rossi fans here will be able to recall what happened to the strong relationship Rossi had with Honda. Something similar is going on in the Yamaha paddock too. The situation in Honda’s case was worse though. Then Rossi was about to leave Honda and now after a strong 7 year old relationship, Rossi is about to leave Yamaha, at least the buzz in the industry suggests this.

When MCN contacted Yamaha boss Lin Jarvin, he said: “It is pretty obvious if there is at any stage a test of a 2011 prototype it will be with a rider that will be with us in 2011.”

He added,“Brno is the kind of timing we are comfortable with. We originally said we wanted to have clarity with our future plans by the summer break but that has not quite worked out. You have your own contacts within this world but from my position I can’t say anything until Brno.”

Ducati on the other hand is waiting for Yamaha to let Rossi test the Italian bike. Even we are waiting for that, aren’t we?

Thanks to the developments like these, the situation is now getting more transparent!