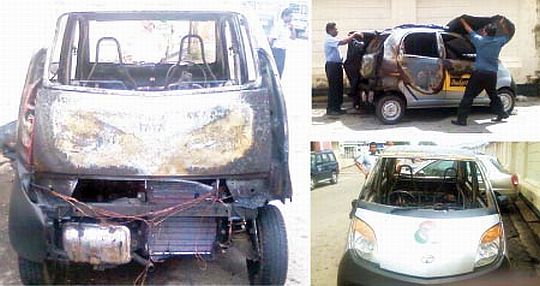 Tata Motors seems to be getting into deeper trouble after another Tata Nano burst into flames, now in Sri Lanka. The car was being used as a taxi by a cab company in Sri Lanka by the name Budget Taxi. Tata Motors had just started exporting Nanos to Sri Lanka in May, 2011. In just 4 months, the flames have debuted in Sri Lanka too.

Just a while ago, we reported a Tata Nano that caught fire at Anand, Gujarat. these flames have not only been burning the car but also its reputation thus, pushing the sales downwards. It is a fact that Tata Motors had concluded its investigations in the previous fires and commented that the flames weren’t due to any engineering faults. However, due to the repeated mishaps in regular intervals, there seems to be something fishy and Tata Motors owes and explanation for the same.

The recent alarming infernos have put up a huge question mark on the safety of the car.