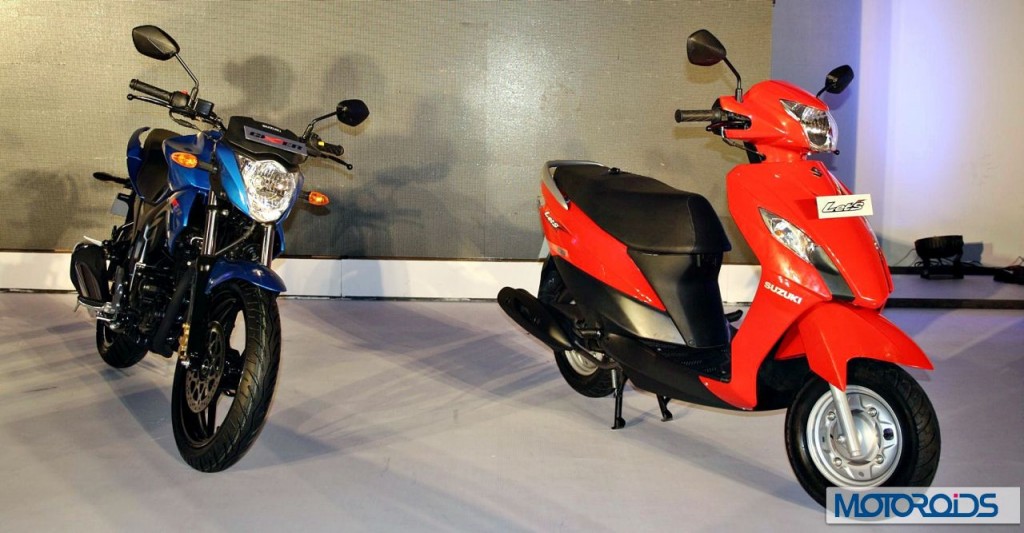 With barely a day to go for the 12th Indian Expo 2014, automobile manufacturers have been spilling news of their upcoming launches and in fact unveiling their new range set to adorn their stands at the automobile convention.

Suzuki Motorcycle India has announced its plans to showcase and launch its spate of four offerings for the Indian two wheeler segment- though two out of the slated four products have already been made familiar to the population. To start with the count, Suzuki would officially launch the female centric 110cc autoscoot- the Suzuki Let’s recently unveiled and endorsed by Bollywood actress Parineeti Chopra.

The second offering does seem to have garnered maximum reactions and interest- the rakishly styled Suzuki Gixxer 155cc motorcycle. Unveiled to cater to the performance conscious premium-commuter segment, the Suzuki Gixxer should give Suzuki decent sale numbers in the expanding 150cc segment, something which the Suzuki GS150R couldn’t succeed at.

The third would most probably be the updated variant of the Suzuki Access 125, which alongwith the Let’s should take to the auto scoot segment battle with added force. The Suzuki Inazuma 250 has already seen an official launch which already seemed to have ticked off a lot of minds- thanks to its 3 lac+ pricing figure and shouldn’t add to the inclusion, which brings us to the fourth product slated for the Auto Expo launch. We did manage to get us excited thinking of maybe another performance motorcycle from the Japanese manufacturer, but we’re guessing it would be an updated version of its 115cc commuter- the Suzuki Hayate.

Suzuki Motorcycle India’s would be positioned at Stall No. E22, Hall No.6 at the 2014 Auto Expo. Needless to say, we’d be bringing you all the action “LIVE” on Motoroids.com. Do not forget to bookmark OUR PAGE  specially created for the Auto Expo 2014. Also we would be updating our FaceBook Page to bring in LIVE Updates to our 115,000+ followers.