We are on our way to Hyundai Grand i10 compact sedan unveiling event in New Delhi and here are the preliminary details of the upcoming arrival, which will be showcased at the fast approaching Auto Expo 2014.

The new Hyundai Grand i10 Compact Sedan launch will happen in March this year and the new car will greet us all at the Auto Expo 2014.

The new Hyundai Grand i10 compact sedan will be to the donor hatchback what the Dzire is the Swift and the Amaze is to the Brio. The production spec  Grand i10 compact sedan is likely to go on sale in a few months from now. The new car measures less than 4 metres in length and will benefit from excise duty concessions when it goes on sale later this year (probably, around the festive season).

The new Hyundai Grand i10 Compact Sedan is basically a ‘boot-ed’ version of the hatchback and comes with new rear doors, a ‘rather stubby’ boot, new taillamp, and a set of new bumpers.

On the inside, the car would look similar to its hatchback sibling and is likely to benefit from high features list when it goes on sale later. It is hihgly probable that the car will come with segment-first features such as rear aircon vents, chilled globebox, high-end in-car entertainment system, et al. Also, there are good chances that the car will receive revised rear seat backrest angle.

Powering the new Hyundai Grand i10 compact sedan will be the same set of engines that power the hatchback These would include the 1.2 litre Kappa2 four cylinder petrol engine and the new 1.1 litre U2 CRDi three cylinder diesel engine. The car might also get the Verna’s/120’s 1.4 litre CRDi diesel engine.

In a fashion typical of Hyundai cars, the Grand i10 CS will go on sale with a competitive price tag and is likely to come across as a Value For Money (VFM) offering.

Stay tuned to Motoroids for Hyundai Grand i10 Compact Sedan images and details. 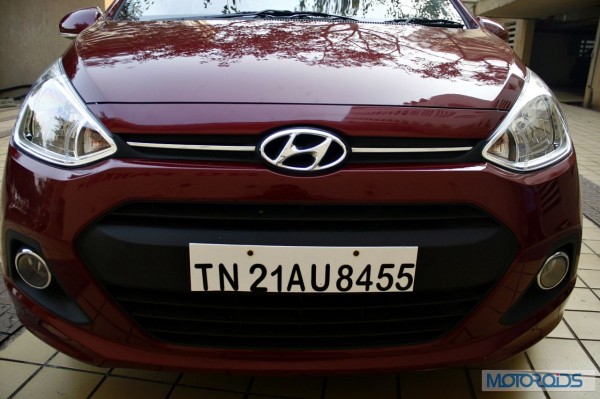