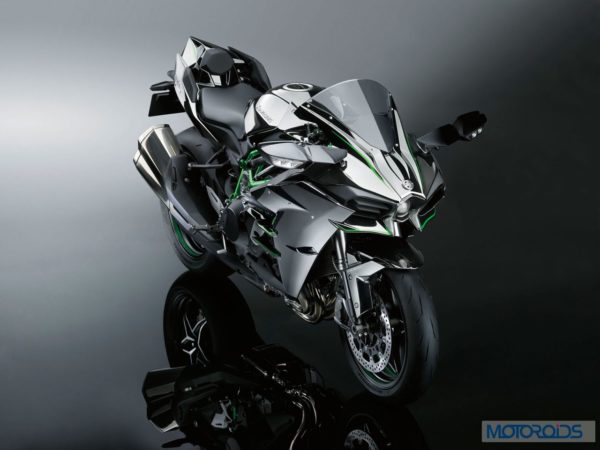 Ever since the introduction of the track focused Ninja H2R, Kawasaki has been continuously teasing the road legal version of the motorcycle, the H2. And now, 23 teaser videos later, Kawasaki has finally released a video that showcases the Ninja H2 in action. Yes! The fastest production street legal motorcycle, the Kawasaki Ninja H2 has been officially revealed. Kawasaki Motorcycles is a division of Kawasaki Heavy Industries. The dream of the company to become a technological leader began 136 years ago. And now, based on the 136 years of innovative thinking and cultivated technology, Kawasaki has introduced the Ninja H2.

Here is the official video:

The supercharged 998 cc in-line four cylinder engine enabled design requirements for big power in a lightweight, compact package. Kawasaki claims that except for minor differences in the engine, the intake and the exhaust system, the 200 PS supercharged engine of the Ninja H2 is essentially the same as the over 300 PS engine of the closed-course Ninja H2R.

Air supplied to the supercharger enters via a single Ram Air intake in the left side of the upper cowl. The Ram Air duct was designed to route fresh air to the supercharger in as straight a line as possible. The supercharger is driven by a planetary gear train, which runs off the crankshaft. The design has been borrowed by no other motorcycle but from Kawasaki’s Aerospace Company which resulted in a very compact unit, with minimal power loss. 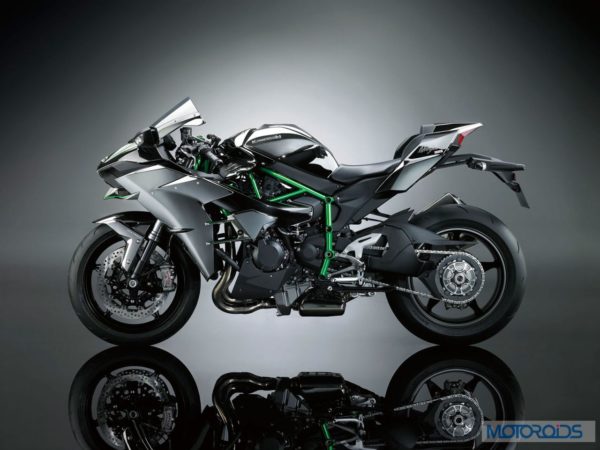 The cooling department is handled by the oil jets. To keep the engine compact and simple, a single lubrication system provides cooling oil for the engine components, supercharger and transmission. Oil jets lubricate the supercharger chain at the contact points where the chain meets the upper and lower gears. In addition, the supercharger drive train’s lower gear has an oil passage. Inside the engine, there are two oil jets per cylinder to ensure the hot pistons are effectively cooled.

The exhaust system has been built for street use to ensure noise and emissions standards are kept under check. Entrance to the header pipes is ovular to match the dual exhaust ports per cylinder. Partly formed by hydroforming, each header pipe tapers from an ovular to a φ45 mm round cross-section. The collector pipes are also hydroformed. For the ideal exhaust pressure, all four header pipes are connected. The exhaust system also includes a compact under-engine pre-chamber, with a double-wall construction for high rigidity. 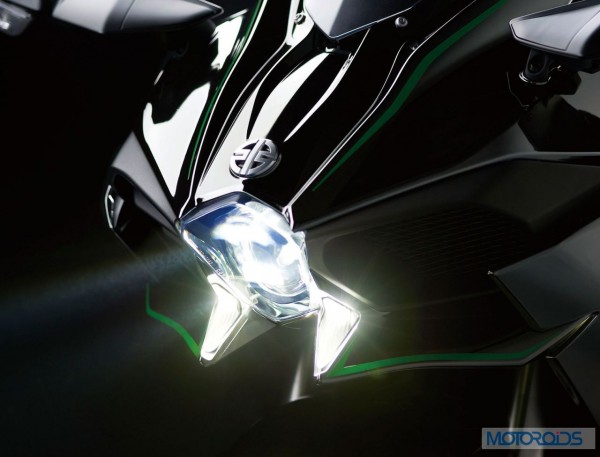 Designed for the performance parameters of the closed-course Ninja H2R and shared with the street-going Ninja H2, the objectives for the chassis were to ensure unflappable composure at ultra-high speeds, offer cornering performance to be able to enjoy riding on a circuit, and finally to have a highly accommodating character. A shorter wheelbase was selected to achieve the compact overall package and sharp handling that were also desired. The new trellis frame provided both the strength to harness the power of the supercharged engine, and the balanced flex to achieve the stability and pliability for high-speed riding. The single-sided swingarm allows the exhaust silencer to be mounted closer to the bike centreline, ensuring a high bank angle for sporty cornering. 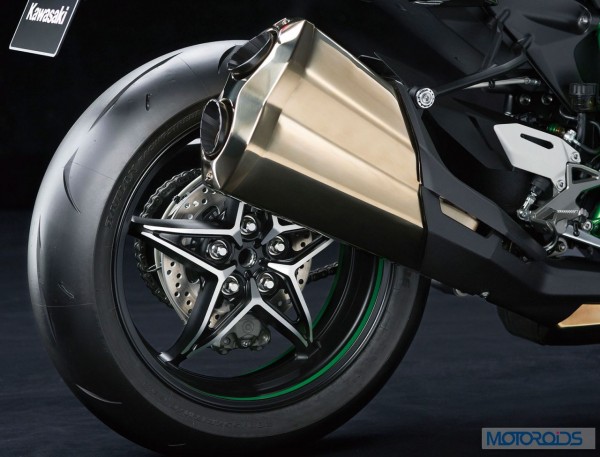 Other features include motocross racing styled, KYB’s AOS-II racing suspension at the front that makes its asphalt debut. The rear gets KYB’s fully adjustable mono-shock suspension. The top of the rear shock mounts to the Swingarm Mounting Plate. The bottom of the rear shock is mounted via revised Uni-Trak linkage that offers excellent feedback regarding the rear tyre’s grip condition to the rider. 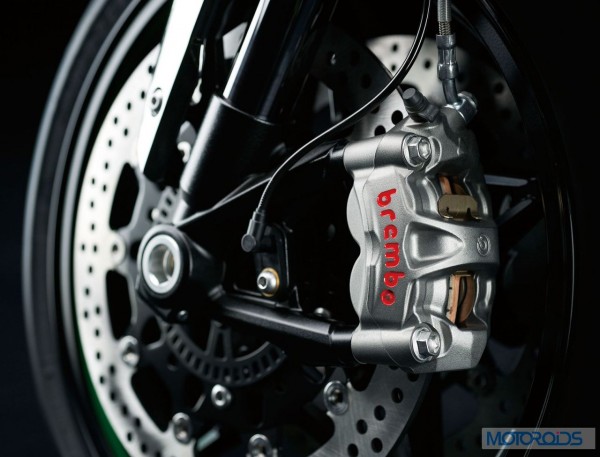 The kind of riding for which the Ninja H2 was designed, and a desire for a compact overall package resulted in a riding position similar to that of a supersport without being quite as aggressive. The rider triangle is similar to that of the Ninja ZX-10R, but more relaxed. As enjoyment of the intense acceleration and high speed capabilities was the first priority, a solo seat for the rider is the only seating provided. At 825 mm, the seat height is slightly taller than the Ninja ZX-10R’s 813 mm. To help support the rider during intense acceleration, hip-supporting pads flank the rear of the seat. The hip support is adjustable 15 mm backward to suit rider size.

The silver-mirror paint used on the Ninja H2 was developed by Kawasaki specifically for motorcycles. While paint similar in appearance may be found in custom circles, this is its first use on a mass-production vehicle in either the automotive or motorcycle industries. Strict Kawasaki quality control measures ensure a long-lasting finish. 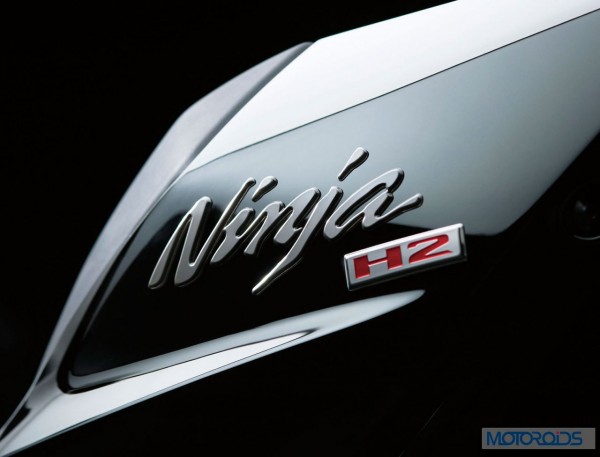 The advanced high-tech design of the instrumentation conveys the image of piloting a jet fighter aircraft. Compact handle control switches put all mode selection and display options at the rider’s fingertips. The design combines a full digital LCD screen with an analogue-style tachometer. The LCD screen features white characters on a black background, contributing to the high-quality image. The tachometer’s black dial “face” looks blank until the engine speed increases. Backlit rpm numbers light up to chase the tachometer needle as it moves around the dial.

The safety net is taken care by advanced electronics that work behind the scenes to provide rider support. Depending on rider preference, many of the systems may be turned off. And while the high-performance engine was designed to be accommodating even without the benefit of electronic assistance, when electing to fully experience the Ninja H2’s intense acceleration or high-speed potential, these systems are available to provide an extra degree of rider reassurance. 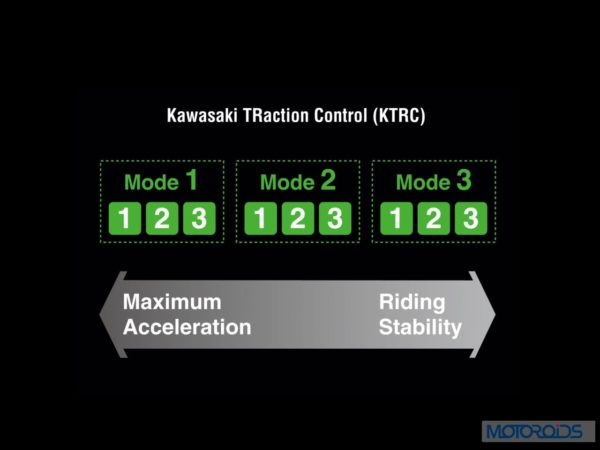 The Kawasaki Ninja H2 receives new KTRC (Kawasaki TRaction Control) that combines the best elements of Kawasaki’s earlier traction control systems. Multi-level modes, plus an independently activated Rain Mode, offer riders a greater number of settings to choose from, with each mode providing a different level of intrusion to suit riding conditions and rider preference, and all modes designed to manage output when a sudden slip occurs.

Designed to assist the rider by optimising acceleration from a stop, KLCM (Kawasaki Launch Control Mode) electronically controls engine output to prevent wheelspin and minimise wheelies when launching. Riders can choose from three modes, each offering a progressively greater level of intrusion. Each mode allows the rider to launch from a stop with the throttle held wide open. 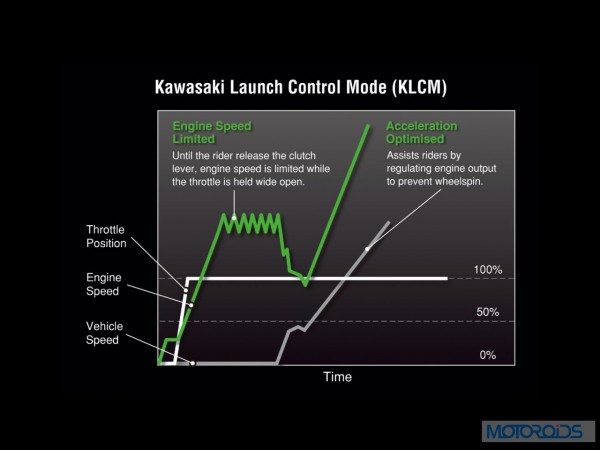 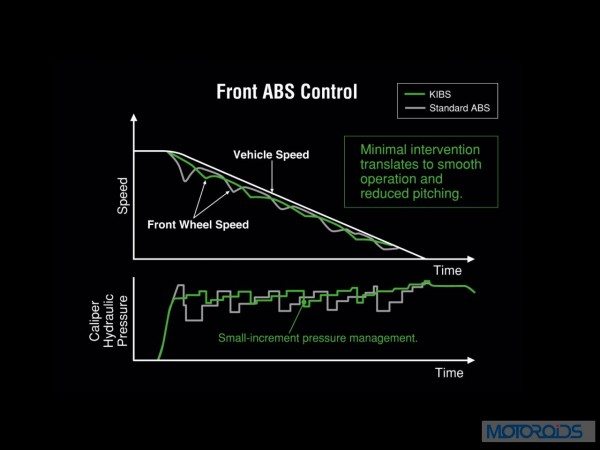 Kawasaki’s electronic steering damper was jointly developed with Öhlins, one of the most popular and respected manufacturers of steering dampers. Unlike a mechanical steering damper—in which the settings, once fixed, must cover all riding conditions and speeds—the damping characteristics are changed electronically according to vehicle speed, and the degree of acceleration or deceleration.

Here is the technical specification sheet of the road legal Kawasaki Ninja H2: 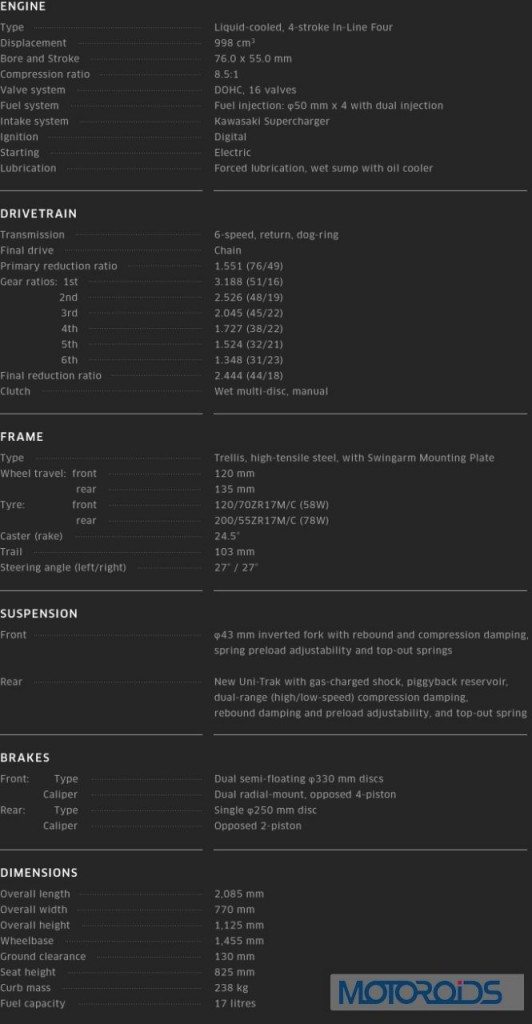 The street legal H2 and track ready H2R are expected to go on sale in 2015. However, the price tag is a big question mark. With the number of technological advances that these motorcycles receives, they will retail at an hefty price tag. Expect to see a price tag of about £25,000 (approximately Rs 24.56 lakh) on the street legal H2. The track focused H2R is expected to carry a price tag that will be twice of that of the Ninja H2. What do you think of the Kawasaki Ninja H2? Share your thoughts and opinions with us through comments below. Stay tuned to Motoroids for more updates from motoring industry.