Mahindra stepped into the two-wheeler segment with lot of enthusiasm. However, setbacks and unannounced reasons left the Indian manufacturer into a jiffy forcing it to withdraw, what was once suppose to be the flagship motorcycle for the company, the Mojo.

The hopes of seeing the Mojo on the street almost died until the company, during the launch event of the Centuro, confirmed Mojo 300 street bike. The new variant of the Mojo was introduced at the Delhi Auto Expo in 2014. 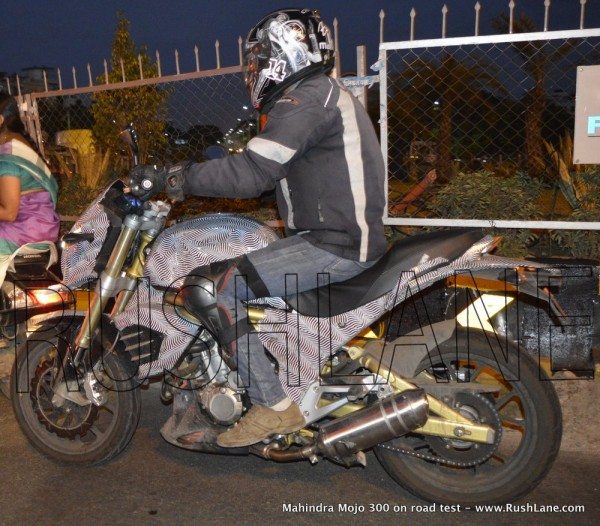 Now, the new and improved Mahindra Mojo is being spotted in a camouflaged avatar over last four weeks indicating that Mahindra is determined on making a debut in the well received 250-300cc segment in India.

In latest update, a camouflaged test model of the Mojo was spotted being tested near Pune by Rushlane.com. The model seen in the images seemed almost production ready. Attempts made by the rider to avoid being photographed merely showcased the bikes ability to pull up to high speeds quickly reported Rushlane. 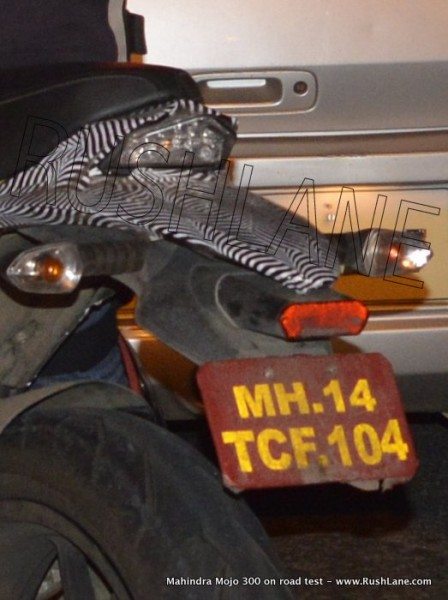 Mahindra Mojo dons a 295cc, four stroke, single cylinder, liquid cooled engine with Dual Overhead Camshaft (DOHC). The engine is capable of producing maximum power of 27 bhp at 8,000 rpm and a peak torque of 25Nm at 6,500 rpm. Power is transmitted to the rear wheel via a 6 speed gearbox. Twin mufflers on either side of rear wheels are seen, which are only found on Suzuki’s Inazuma in that segment.

Ride indicators include an instrument cluster which comprises of a digital speedometer, analogue tachometer (with shift light) and low fuel indicator, among usual warning lights and distance metres. What makes this product a little premium than its competitors are the USD (Up Side Down) forks also known as inverted telescopic front shock absorbers which are only found on KTM Duke 200/390 in India. The motorcycle would come with Pirelli Sport Demon tyres mounted on Y-spoke black alloy wheels. Stopping power would be provided by disc brakes seen on both, front and rear wheels. The seat also seems pretty comfortable compared to the competition which may also work in Mojo’s favour. 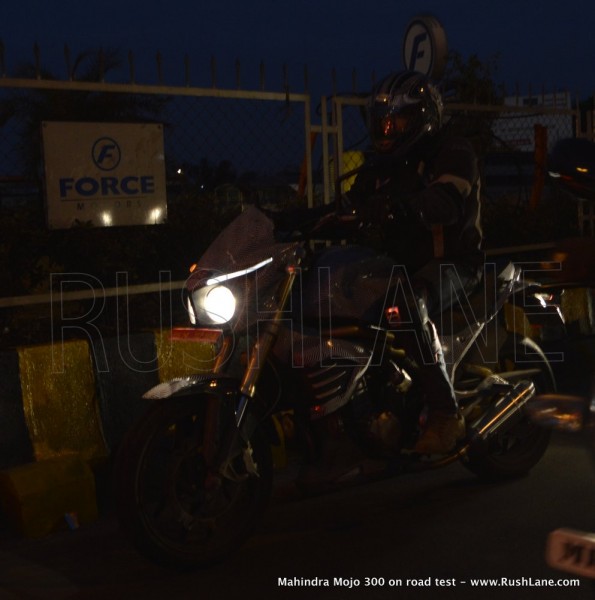 The Mojo will come with twin headlights accompanied by LED daytime running lights. The tail light will also be LED. However, the indicators remain conventional. Riding position is more relaxed with seat set much lower to handle bar, like the KTM Duke 200/390 and the Suzuki Inazuma.

Mahindra should launch the Mojo in the upcoming festive season. But the company will face stiff competition with motorcycle majors like Honda, KTM and Kawasaki already dominating the 200-300cc segment in India. Also, Mahindra will have to keep a competitive price in mind given the aggressive pricing done by KTM.

Here is the image gallery of the Mojo displayed at the Delhi Auto Expo 2014: