Jan Kisiel won the qualifying session for the first time in the history of his starts in Volkswagen Castrol Cup. At the end of a very fierce fight, Kisiel was overjoyed. He lapped two fastest laps and also in Sunday’s race he will start from pole position. During the morning qualifications black skies made their way again over Poznań Circuit, but fortunately there was no rain. Conditions were stable, so the cars went out on slick tyres. Almost from the beginning of the session Jan Kisiel showed greatest pace. 20-year-old from Warsaw told that before the round in Poznań he wanted to work hard on concentration and pace in qualifying. Kisiel did as he said – he covered two fastest laps.For most of the session there was fierce battle behind Kisiel’s back. Most changes in the lead we had at the beginning of the session, when the drivers had new tyres. The fight was extremely fierce.Finally, the second time belonged to Robertas Kupcikas. Lithuanian driver lost only 0.063 seconds toKisiel. Just a little bit slower lap made Marcus Fluch (+ 0.079 s). Maciek Steinhof was fourth (+ 0.243s). Krystian Korzeniowski also showed good performance, and won fifth position (+ 0.266 s). KubaLitwin couldn’t be satisfied. Szczecin-born driver didn’t perform as he expected, and he will begin firstrace form 16th grid. Meanwhile Jerzy Dudek continued improving his performance. Former goalkeeper got 13 th result. Gosia Rdest finished three positions higher.Battle for second best time was very leveled as well. Second best time determines the starting orderbefore race on Sunday. Here again Kisiel was the fastest. This means that he won a double pole position. Kisiel will be chased by second Marcus Fluch. Jeffrey Kruger, third in overall standingsgrabbed 3 rd spot. The fourth time belonged to Krystian Korzeniowski. Kupcikas went significantly slower (7 th place). Jerzy Dudek will start the second race from the 18th place and Gosia Rdest again finished in 10 th place. 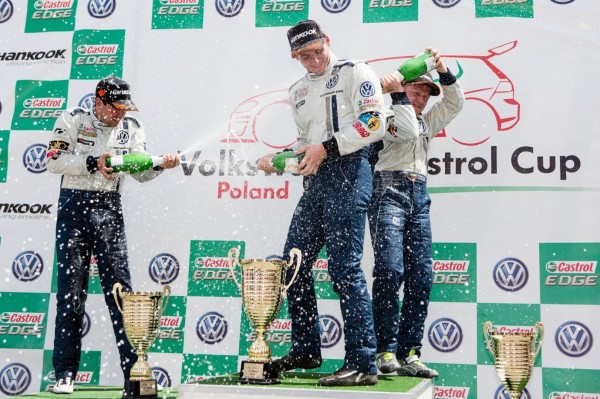 Dry track, wet track, safety car, many overtaking maneuvers – there was a lot of action during first race of Volkswagen Castrol Cup second round. It was Robertas Kupcikas who won. Kupcikas made a great start even though he started the race from part of the track which was much more wet.Lithuanian driver overtook Jan Kisiel and was leading from start to finish. It was his third win in a row.Before the race track was almost completely dry. The weather didn’t announce the coming troubles.All the cars started on the slick tires designed for dry tarmac. At the beginning of the first corner Kupcikas was already before Kisiel. Paweł Krężelok was another driver who made a great start, while Marcus Fluch remained third. First drops of rain came already on the first lap. Just a lap later it started raining heavily. On the safety car came out. The rain did not stop, so after 7 laps, the stewards decided to stop the race. Then Volkswagen Racing Poland technical crew started to work. Mechanics quicklyput wet-weather tyres in 22 cup cars and drivers could get back on track behind the safety car. Safetycar came off after two laps and fantastic fight at the track could begin.Kupcikas immediately gained pretty big gap and Kisiel chased him for the remaining laps. There wereuncountable number of duels, overtaking maneuvers and contacts between the competitors. It was a great race for Gosia Rdest. Jeffrey Kruger looked surprised, after Gosia brilliantly overtook him on the second corner. One of the many duels between Steinhof and Krężelok did not end well for the first ofthose two drivers. After a contact Steinhof lost his rear-end and went off the track loosing manypositions. Greatest emotions came on the very end of the race. Michael Gadomski was a last action hero. The driver of a yellow Golf fought to the very end. On the last lap Gadomski came out of the last corner very fast and a just few meters before the finish line overtook Gosia Rdest. 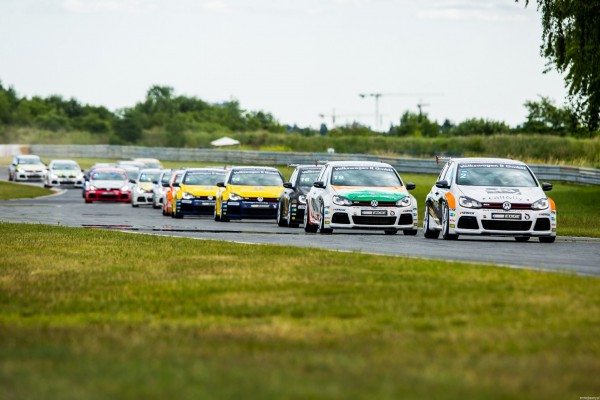 The mistake which Janek Kisiel made on the start gave Jeffrey Kruger a chance to grab his first victory in Volkswagen Castrol Cup. Kisiel, starting from pole position, made a false start, and received a drive-through penalty. Kruger, who followed Kisiel, could not waste such an opportunity. Jeffrey Krugerstarted from the third position and overtook Marcus Fluch at the beginning. Everything showed that battle for the win will be between Kisiel and Kruger. After Kisiel got his penalty Kruger could drive to the finish with calm.Most action happened behind the rear bumper of Kruger’s car. There was a great duel for second place – Robertas Kupcikas chased Marcus Fluch. The Swede kept his head cool, and drove very goodrace, so Kupcikas had no chance to attack and eventually passed the finish line third.Behind Kupcikas there was a whole group of drivers, initially led by Krystian Korzeniowski. Howeverfew laps later, Korzeniowski was overtaken by Jonas Gelzinis. Then Korzeniowski had to recognizethe superiority of Steinhof. On the next lap also Paweł Krężelok and Jan Kisiel got in front ofKorzeniowski. Kisiel, after drive-through penalty, dropped to 10 th position, what made him furious.Kisiel started to chase rivals madly. He was pushing really hard and caught a group of drivers in frontof him. On the following laps he managed to get in front of Jirasek and Korzeniowski. There was notenough time for Kisiel to overtake Krężelok, and Janek finished 7 th . Jerzy Dudek was involved in fightsfor the lower positions and finally he was 19 th . Gosia Rdest did not finish the race.