After the Lodgy, Renault is considering to launch the RBC MPV in the Indian market. We showcased the exterior of the test mule a few days ago. Today, we bring you some pictures revealing the interior details of this MPV. Expected to compete against the likes of the Ertiga, this new Renault will look to grab a pie of the fast growing MPV segment in India. Interestingly, the spy shot also reveals the presence of an optional AMT gearbox, which will add to the ease of piloting this new Renault. 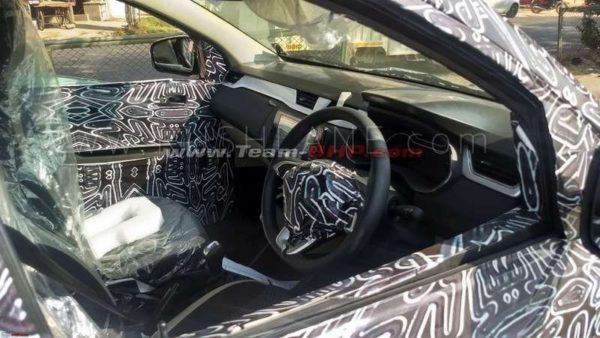 Also seen in the interior of this MPV is a dual tone dashboard. There are some silver accents present in the cabin and the seats appear to be draped in fabric. The centre of the dash features a rather large touchscreen infotainment system which is expected to get a host of connectivity options like Android Auto and Apple CarPlay. This will be a welcome change than the now dated, existing infotainment screen fitted on all Renaults. Other visible details include a 3-spoke steering wheel which also gets silver accents.

This new MPV is expected to be powered by tried-and-tested petrol and diesel engines which also power things like the Duster. While the petrol unit generates a healthy 104.5 hp and 142 Nm, the torquey diesel is expected to the top choice. The oil burner develops 108 hp and 245 Nm of torque in the Duster and is also offered in a de-tuned version which generates 84 hp and 200 Nm of torque. In which state of tune will any of those motors power this new vehicle could be anybody’s guess. We expect this new MPV to be launched in 2019. More updates will follow as and when they arrive. Stay tuned.