The 2017, BS-IV compliant Honda Dio was recently snapped at what appears to be a dealer stockyard. The images, reported by motoring portal BikeAdvice reveal the new generation scooter, donning an updated design. The most noticeable highlight is the addition of a new lighting element at the front. The apron continues to feature the headlight and the front blinkers. However, the blinkers would not be accompanied by a pair of daytime running lights.

The scooter also gets a dual tone finish on the apron, along with new graphics. The leaked images reveal two colour options – White/Blue and Yellow. We’re sure we’d see more options once the scooter is launched. 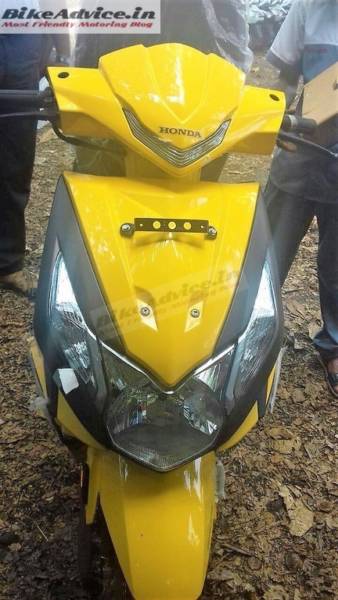 Apart from the visual upgrades, the new scooter will also feature a BS-IV compliant motor although the output numbers aren’t likely to be much different from the outgoing model. The outgoing model draws 8 bhp of power at 7000 rpm and 8.77 Nm of torque at 5500 rpm from its 109.2 cc engine.

It is also likely to carry a slightly premium price tag too. We’d keep you posted about any further updates. Meanwhile, let us know your views about the new design through the comments section below.