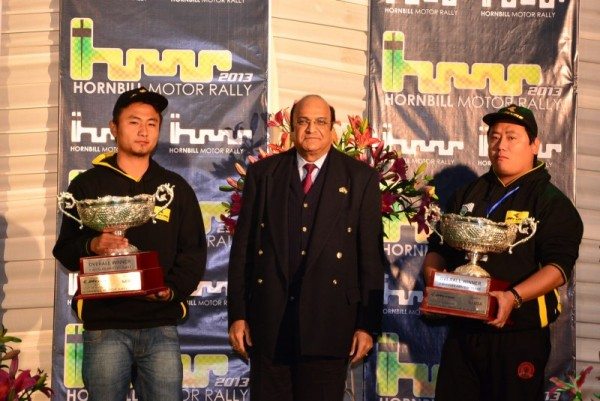 The Sixth JK Tyre Hornbill Motor Rally came to a successful conclusion after exciting action and lots of enthusiasm in Kohima. In keeping with its commitment of taking motor sports to the farthest corners of the country, JK Tyre with the support from the Government of Nagaland has helped to establish the Hornbill Motor Rally as the premier motorsports event in the North East. The Time, Speed, Distance (TSD) rally is organized by the Nagaland Adventure and Motor Sports Association (NAMSA).

The event saw enthusiastic participation from drivers and two-wheeler rallyists. This year saw a significant increase in participation in the four-wheeler and two-wheeler categories including an all-women’s team that also took part in the challenging event. The participants came from Assam, Nagaland, Meghalaya, Delhi and Chandigarh reflecting the pan-Indian appeal of the JK Tyre Hornbill Motor Rally.

The rally covered a total distance of 130kms after being flagged off by Mr. Sanjay Sharma, Head- Motorsports, JK Tyre & Industries Ltd from the IG Stadium. The rally cars and bikes traversed the hilly terrain passing through the beautiful landscapes of Kezoma, Kedima, Kisama and Naga Heritage village before finishing at the IG Stadium. The rally was a whole new adventure for drivers and navigators and helped them explore the unchartered territories of the state.

The day culminated in a glittering prize giving ceremony presided over by Chief Guest, Dr. Ashwani Kumar, Honorable Governor of Nagaland & Manipur and Dr. Raghupati Singhania, Chairman & Managing Director of JK Tyre & Industries Ltd. The guests were treated to some mesmerizing performances by the famous Tetseo Sisters from Nagaland.

The four wheeler category was divided in four classes– professional, amateur ladies and couple classes, while two-wheeler category had one combined class. In the professional class, SK Ajgar Ali and co-driver Mohammad Mustafa clinched the top honours with a cumulative time penalty of 10 seconds. Former Raid-de-Himalaya winner, Along Aier and co-driver Chandan Sen finished with the second best time penalty of 17 seconds, while Chidanand Murthy Sathish Gopalakrishnan finished third with a time of 22 seconds.

In the Amateur Class, Nitoka Chopi and co-driver Philip Lam finished on the top of the time sheets with a cumulative penalty of 5min 06 sec, while Kezhaletuo and co-driver Bodevi Shuya finished second with a total time of 9min 53 sec. Mikrio Kayina and co-driver Arun Kayina clinched the last spot on the podium with time penalty of 14 min 14 sec.

TSD rallying (Time Speed Distance) is a form of motor sport usually conducted on public roads (following Traffic Rules) but sometimes including off-road and track sections. The objective of these rallies is to maintain precise times and precise average speeds on various segments of a predefined route. Each team consists of a rider/driver and navigator. In a Time-Speed-Distance Format, the route instructions, in addition to instructions to keep a team on course also gives assigned speeds. This is where a common man can get his personal road car with basic safety equipment’s as provided by manufacturer to participate and experience the thrill of motor rallying.