Romania has a national holiday on December 1, and the Ministry of Defense showcased a special Dacia Duster on this occasion. This special Duster is modified for military use. The Dacia Duster Army was the highlight of the traditional military parade that takes place each year under Bucharest’s Arch of Triumph monument.

This car is modified by Renault’s Romanian engineering center RTR, and the military vehicle complies with NATO standards and also with the Romanian Army’s transport necessities. 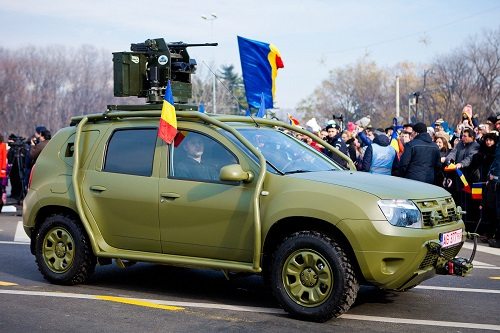 The Duster military vehicle is fitted with a series of special enhancements which include an armoring system, additional under-body protection for the engine, gearbox, fuel tank and rear differential, a removable winch, anchoring system for air transport, capability to tow military trailers, “black out” and camouflaged lighting systems, plus exterior 12V and 24V sockets. 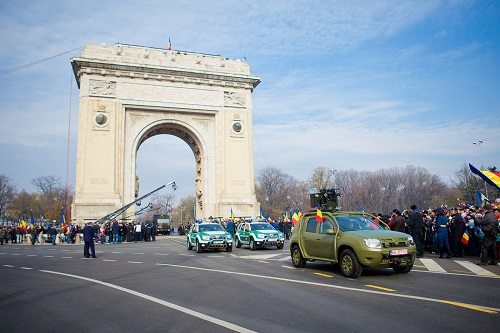 The most important equipment is the addition of a machine gun mounted on top of the car, on a roll cage-like structure. Details haven’t been shared, but the use of the machine gun is its obvious. Engine modifications are not known, but since the car carries extra weight of the armor and all those extra equipment, we can safely assume that the engine must be tweaked for the extra juice required.

Two Duster police vehicles were also a part of the parade, which were based on the facelifted Dacia Duster. The facelift features special visual and acoustic upgrades, as well as police specific equipment. Also other special vehicles based on the Duster which marked their presence at the parade were from the Gendarmerie, firefighters and border police.