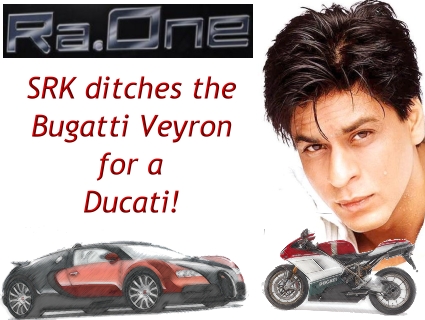 Indian superstar Shahrukh Khan loves to enact his own personality in each and every one of his films no matter what the actual character in the film demands. However, like the exception he made in Swades, SRK will now keep his superstar image aside for once and attempt to act as a superhero in his upcoming movie ‘Ra.One’ (which apparently stands for ‘Random Access Version One). Ahem, coming back to the point, SRK was supposedly going to drive a Bugatti Veyron in the movie to divert the viewers’ attention off his increasing forehead wrinkles. But it seems the movie chiefs came up with a better plan! They will now hide SRK’s ageing face behind a helmet and have him ride a Ducati instead of the Veyron. Which Ducati, we don’t know yet. But Shahrukh confirms the Italian bike via Twitter saying, “Just to clarify the rumor; I am not driving a Bugatti or anything, it’s a Ducati motorbike that we have in ‘Ra.One’.” That has us thinking, what will they do to his face for the rest of the movie?  Krish?