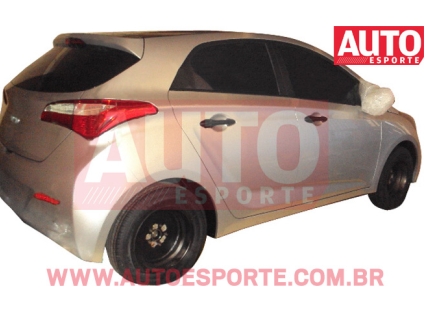 The folks at Auto Esporte have struck gold! They have managed to get their hands on photos of what looks like a functional prototype of Hyundai’s upcoming city car. We had shown you sketches of the car a few weeks back and like most of you, it was too hard for us to believe that the car could look so radical. However, the prototype that you see here is very close to the early sketches that had surfaced on the internet. Auto Esporte claims that the H800 (codenamed HB for the rest of the world) will be powered by a 1.0-litre flex fuel engine and a 1.6-litre petrol engine for the South American market. However, for India, Hyundai is developing an 800cc engine to begin with.

The design follows the same radical theme as the new Elantra, i40 and the new Verna. The new small car borrows its cues heavily from the ‘ixMetro’ concept that Hyundai had showcased a while back. We strongly feel that if this car comes with an 800cc engine and is placed below the i10, then even with the upcoming facelift, the latter is going to look a tad too bland compared to this little wonder.