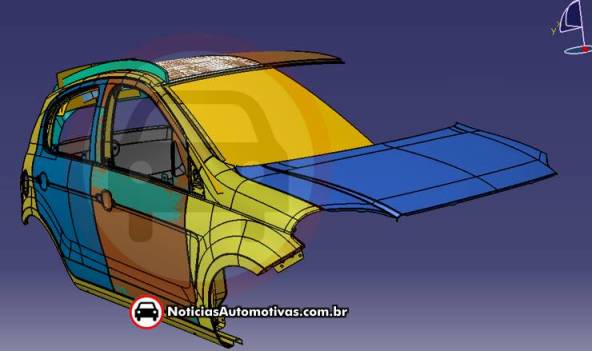 Noticias Automotivas of Brazil claims to have got the leaked images of the next generation Palio. The car has a great fan following in India, owing to the fact that it really was the first true hot hatch in the country. The news should come as music to the ears of the appreciators of Italian car. The images seem to have been generated using a CAD software and give the details only about the monocoque of the car. However, much can be deduced once you have a good look at the drawings of the leaked structure.

The new car seems to principally follow orthodox, tall-boyish design without any radicalism, although it’s decidedly more modern looking and curvy than the outgoing car. The new body structure seems to be designed keeping space and practicality in mind. The designs indicate liberal head and leg room which were the forte of the previous generation Palio as well. The design also suggests a high bonnet, slightly flared wheel-arches and elongated, swept back headlamps following the popular design pattern. The rear tail-lamp will be vertical with an elliptical base intruding the rear-side panel of the car. Expect a huge front bumper and a reasonably big rear bumper too, looking at the rather highly positioned ends of the bonnet and tail gate. The car seems to share minor cues with its Punto sibling, but as we see it, it’ll be a totally different looking car once the mouldings and other decorative items come into place.

Engines may include the 1.3-litre turbo diesel doing duty in the Punto and the 1.4-litre FIRE petrol. Some smaller engines may also make an entry under the new Palio’s bonnet. We are expecting a 2011 launch of the Palio in the month of May – starting from Brazil and Argentina simultaneously, and the car can make an entry into India by early-mid 2012. The car, just like the Panda and the Punto is expected to take the volumes and profitability for the Italian brand to new highs. If fitted with the right engines and priced properly, the Palio can revive the fortunes of the company in India – a country where it reigned supreme at one point in time. Check out the Image Gallery of the next-gen Palio here..