Home News Scoop! Is this the new Honda 250 for India? 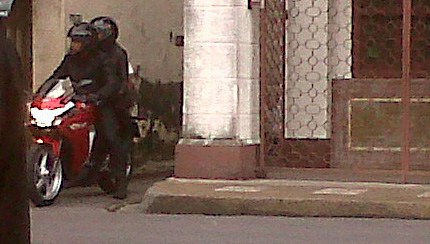 What you see here in the pictures are the first images ever of probably a 250cc Honda which is being developed in Thailand for consumption in Asian and European countries. The bike seen in the pictures, although very smudgy and lo-res, clearly resembles the VFR 1200F street tourer bike that was brought to India by Honda a few months back.

The fully faired bike will most likely feature a liquid cooled DOHC mill. The skinny tyres make clear that it’s not a big-capacity machine, and the relatively small single disc up front further substantiates the fact. Honda should ideally have the unchallenged Ninja 250R within its sight as a target, however, since we cannot make out clearly whether it’s a single or twin cylinder machine. Goes without saying, the configuration will have great bearings on the performance of the bike eventually. These are still the very first pictures, and a tad too smudgy to make much out of. However, now since we have seen these, we would soon bring you more info on this machine as soon as possible