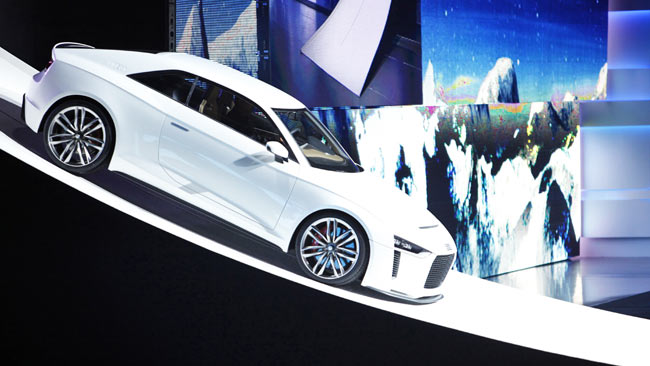 Audi has unwrapped the Audi Quattro Concept at the ongoing Paris Motor Show and we bring you some of the live shots from the venue of this aggressive little coupe. The concept car is being presented as a tribute to the original Quattro and 30 years of Quattro technology. Drawing its inspiration from the original 1980 Audi Ur-Quattro and using some underpinnings from the current RS5, the Quattro concept features a shortened wheelbase, lower roofline and a sub-3,000 pound curb weight.

A prominent bonnet slit rams air into the turbocharged in-line five cylinder that belts out 300kW and 480Nm. This is a variation of the direct injection five-cylinder engine available in the brutally fast RS5. It seats four, but the rear seats are only for little people or big people on a short trip. The custom-made body, which features massively pumped out guards, is primarily made of aluminium but carbon-fibre has been used for the bonnet and rear hatch. The concept car weighs only 1300km, and is able to reach the 0 to 100 km/h mark in 3.9 seconds.

It is not certain yet, if the turbocharged five- cylinder engine and carbon- fibre panels would transform into a production version. And even if it fails to reach the showrooms, the design themes of the concept will be blended into future sport Audi models.