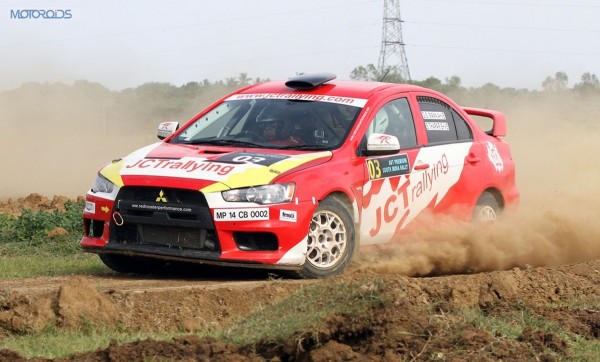 Samir Thapar and his co-driver Gurinder Mann of JCT Rallying team rolled back the years by winning the MMSC promoted AVT Premium South India Rally, the third round of the FMSCI Indian Rally Championship, here on Sunday. In the process, Thapar, driving a Mitsubishi Evo X, stopped the winning spree of championship leader Gaurav Gill (co-driver Musa Sherif) of Team Mahindra Adventure who finished overall second ahead of PG Abhilash (Kumar Ramaswamy) in a Evo 6.

Thapar, who enjoyed a sizeable lead overnight over Gill, winner of the previous two IRC rounds in Nashik and Coimbatore, again showcased the pace and power of the Evo by winning all the four Stages, including the Spectator Special Stage with much to spare. Thapar, 50, had last won a National championship event in 1997 before quitting the sport while for 49-year old Mann, a multiple Indian champion in his hey days, it was his first success since winning the Asia Zone in 2000. Thapar had words of praise for the organizer, MMSC, who he believed did a great job with the event. He commented, “It is a great moment for us oldies and winning an event after such a long time is just fantastic. The Stages, the organization and just about everything here was perfect. Yesterday, during the first loop, I didn’t have the Pirelli tyres which arrived here in time for the second run and they made a huge difference. The car too was just about right and of course, we both are extremely happy to win here today”.