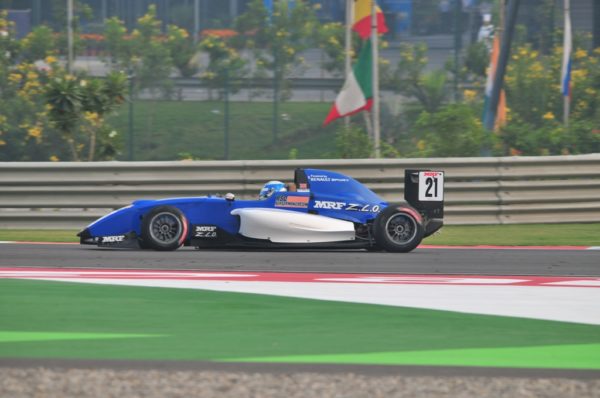 British driver Rupert Svendsen Cook managed to win Race 2 of the MRF Challenge 2013 at the Buddh International Circuit (BIC) in Greater Noida even after accidently hitting the pit lane limiter in the final corner on the last lap. Sam Dejonghe took his first podium of the season as he fended off a charging Tio Ellinas to finish in 2nd position. Tio Ellinas with his double podium finish has taken the championship lead.

Sean Walkinshaw started on pole for the reverse-grid Race 2 along with Svendsen-Cook on the front row. Walkinshaw got bogged down at the start allowing a stream of cars past him as Svendsen Cook went into the lead. Dejonghe moved into 2nd place with Yudai Jinkawa following him in 3rd place. Behind them Race 1 winner Arthur Pic was in 4th place with Tio Ellinas in 5th place. Pic tried to go around the outside of Jinkawa on lap 2 but ran wide, allowing Tio Ellinas to get past as well. Ellinas then pulled off a great overtaking move at Turn 6 to get past Jinkawa and move into 3rd place. Svendsen-Cook comfortably led with Dejonghe unable match his pace due to a throttle problem. Svendsen-Cook came into the final corner on the final lap and accidently hit the pit lane speed limiter, which resulted in him coasting across the finish line. Ellinas meanwhile closed in on Dejonghe on the last lap but was unable to get past as they crossed the finish side-by-side. Vikash Anand finished in a creditable 11th position while the other two Indians were unlucky with Ashwin Sundar and Parth Ghorpade both retiring.

Race winner Rupert Svendsen Cook was excited to win after being contesting his last race over 18 months back. He commented, “Winning on my first race weekend in 18 months is amazing and I am really happy. Pressing the pit lane limiter on my last lap was scary but luckily I had built enough of a lead to finish ahead. I have not been happy with the car the whole weekend and have also been very rusty. The car felt much better today and I got a great start and after that it was all about maintaining the pace. The MRF team has been really supportive so a big thank you to them”

GP3 driver Tio Ellinas was ruing the time lost behind Jinkawa but was happy with another podium finish. He said, “My start was not so good but I managed to stay 5th. Arthur (Pic) went off track while trying to pass Jinkawa and after that we were side by side but I just got ahead. By the time I passed Jinkawa the gap to Sam (Dejonghe) was too big but I managed to catch him on the last lap. I tried my best but could not get past. I am very happy to be leading the championship after the first round and look forward to Bahrain now.”

Sam Dejonghe finished in 2nd place after struggling with a throttle problem for most of the race. He said “I started on new tyres and they took 3-4 laps to get up to maximum temperature. By the time I could start catching Rupert I had a problem with the throttle which forced me off couple of times. Tio (Ellinas) was closing in fast and was really close on the last lap. I just managed to hold him off. It feels great to be on the podium so look forward to racing at Bahrain.”