When it comes to lifestyle motorcycling, nothing beats brand Royal Enfield in India. Having successfully created immensely popular events like the Rider Mania which allows RE fans to congregate at a common junction, the RE community is strong and growing. An RE fan’s affinity to the brand is further expanded by some exciting rides which are conducted throughout the country, and internationally, along with merchandise, which reflects the joys of motorcycling. 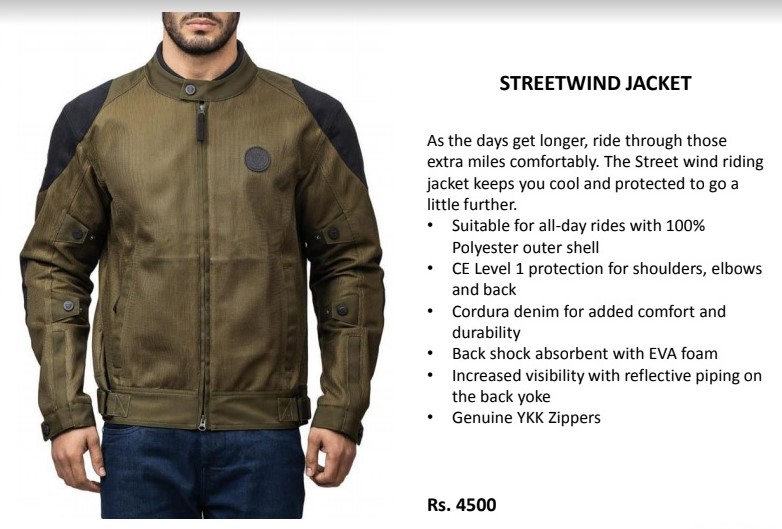 Royal Enfield’s Spring Summer apparel merchandise this year, includes a new mesh jacket, called the ‘Streetwind’. Designed to keep the rider cool in the Summer heat, the jacket is made of a 100% polyester outer shell. CE Level 1 protection for shoulders, elbows and back keeps the rider assured and safe, while Cordura denim in the construction adds comfort and durability. In the event of a fall, the rider’s back is protected by a shock absorbent protector made out of EVA foam. For those who ride in the dark, reflective piping on the back yoke enhances visibility for other road users and YKK Zippers ensure smooth zipping and unzipping. The Summer jacket is priced at INR 4,500. 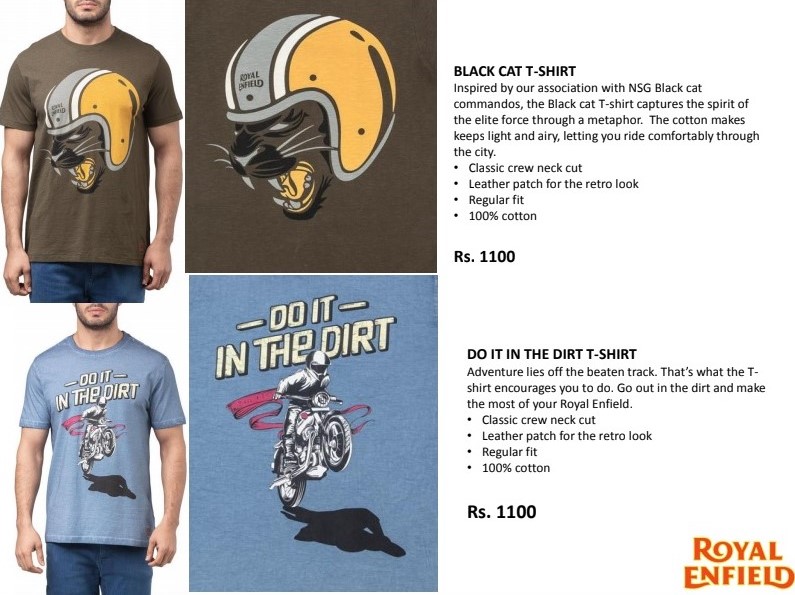 New patterns for t-shirts have also been introduced, where one of the tees’ design is inspired by prayer flags found in the Himalayas, another is inspired by RE’s association with the NSG Black Cat commandos, and one which depicts the fun involved in dirt riding. Made out of 100% cotton, these t-shirts are priced at INR 1,100 and are of the classic crew neck cut type. This new collection is available at all Royal Enfield dealerships, at the brand’s online store and on Amazon and Flipkart.

On the product front, Royal Enfield recently launched the Bullet Trials, which is an off-road ready, Scrambler-styled factory custom. Paying homage to the Bullet Trials of 1949 which was ridden by Johnny Brittain, the bike is available in 350 cc and 500 cc variants, priced at 1.62 lakh and 2.07 lakh, respectively. RE is also busy testing its new generation of single-cylinder motorcycles, which will replace the current range of Classic, Thunderbird and Bullet motorcycles. Better built and ready to meet upcoming norms, these new bikes should come out sometime next year.