A street-styled, straight bar alternative to its relaxed cousins, the Royal Enfield Thunderbird X has finally received dual-channel ABS treatment. Caught at a dealership’s floor in the town of Nashik, Maharashtra, all other bits on the bike appear to be the same as the non-ABS bike. 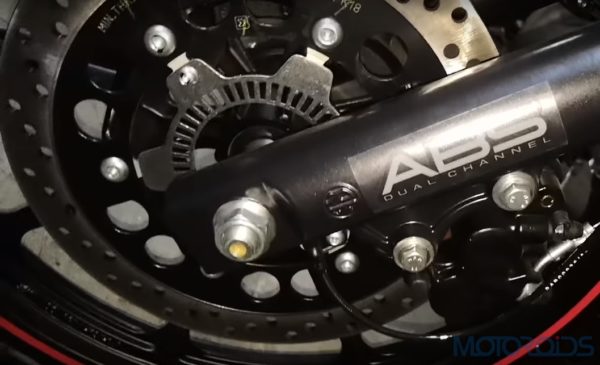 How do you differentiate between the two? There’s a tiny sticker on the front forks which gives away the presence of the equipment, and then of course, the visual confirmation of an ABS ring gives it away. Launched in the month of February 2018, this youthful RE is available in both, 500cc and 350cc variants. It scores high on visual appeal with alloy wheels, funky paint schemes, tubeless tyres, ‘gunslinger’ styled seat coupled with the new grab-rail and shortened rear mudguard.

The Thunderbird X gets a blacked-out theme which covers the exhaust pipe, front forks, side covers, headlamp cover, indicators and grab-rail on both the 350cc and 500cc models. In high contrast, the vibrant colours of the tank are coordinated with the stitching on the seat and rim-tapes on the wheels. The new flat handlebar has been dropped to give it a more aggressive, and leaned-in and committed riding stance. The Thunderbird X range is available in four colours – the 500X comes in Getaway Orange and Drifter Blue, the 350X is available in Whimsical White and Roving Red. 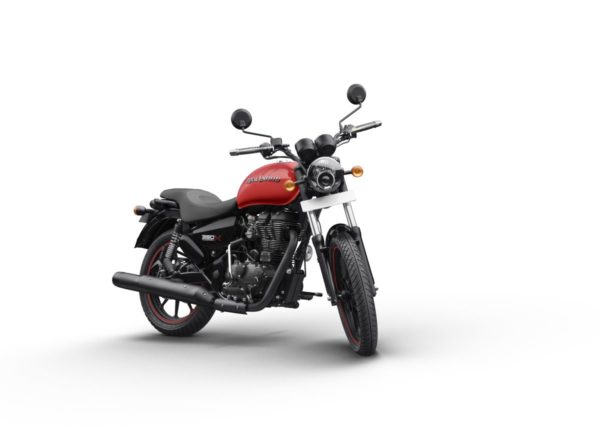 The X range uses the same engine as the standard Thunderbirds. So, the 350X comes with a single cylinder, air cooled, twinspark, 346cc engine which produces a maximum power of 19.8 bhp @ 5250 rpm and generates a maximum Torque of 28 Nm @ 4000 rpm. The Thunderbird 500X uses a single cylinder, air cooled, 499cc engine fed by an electronic fuel injection system which produces maximum power of 27.2 bhp @ 5250 rpm and generates 41.3 Nm torque @ 4000 rpm. We believe with the addition of ABS, the bikes will command a slightly higher premium. Do check with your nearest RE dealership for more information about that.