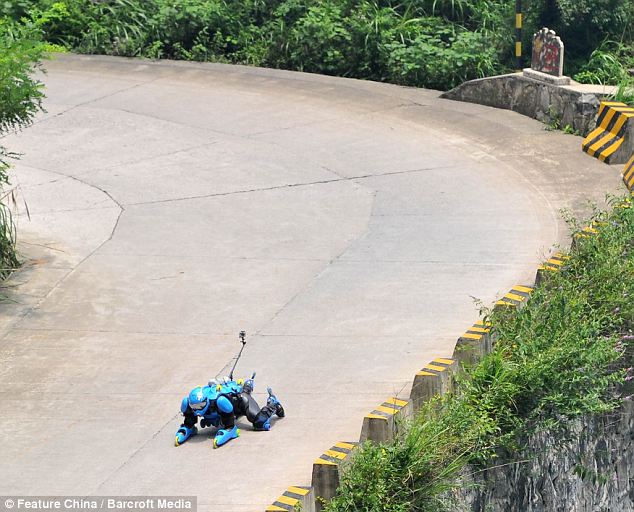 In an act that will be called daring by many and foolhardy by some, French ‘Rollerman’ Jean-Yves Blondeau ‘rolled’ 1000 ft. downhill on Tianmen Mountain road in Zhangjiajie, China. His attire for the occasion had 31 skateboard-wheels distributed between the torso, back and major joints. The suit took Blondeau to speeds of up to 70mph during the downhill run. The road that the French man chose as his playing ground has 99 hairpin turns and runs for almost 11 kms. The distance of 10.77 kms was covered in merely 19 mins and 34 sec. Some sections of the road were installed with a specially designed metal track and spectators saw Blondeau having a little ‘flight’ from the jump designed at the bottom of the track.

In case you are wondering, the speed record for Blondeau’s suit is 116 km/h and was made at Mont Ventoux, Provence using a 26 wheeled version. Blondeau once told French papers: ‘I wanted to work with the human body. Do feel the sensation of balance and locomotion.’

We have nothing but a lot of admiration and respect for this French man and his affair with these acts.