There was a time when the Renault Duster used to rule on the Indian roads. It reeked of practicality and its rugged looks found many takers as well. It soldiered on for many years but then eventually fell victim to the new crop of modern compact SUVs which emerged. The BS6 Renault Duster is currently powered by a 1.5-litre petrol engine which makes 106 PS and 142 Nm. The Duster will now have a new weapon in its artillery in the form of a 1.3-litre turbo petrol engine.

With the assistance of a new powertrain pumping the affairs, once launched, it will become the most powerful SUV in its segment. The 1.3-litre turbo petrol engine cranks out 156 Hp and 250 Nm of torque. Renault has confirmed that the BS6 Turbo Petrol Duster is all set to get officially launched and take on the competition. 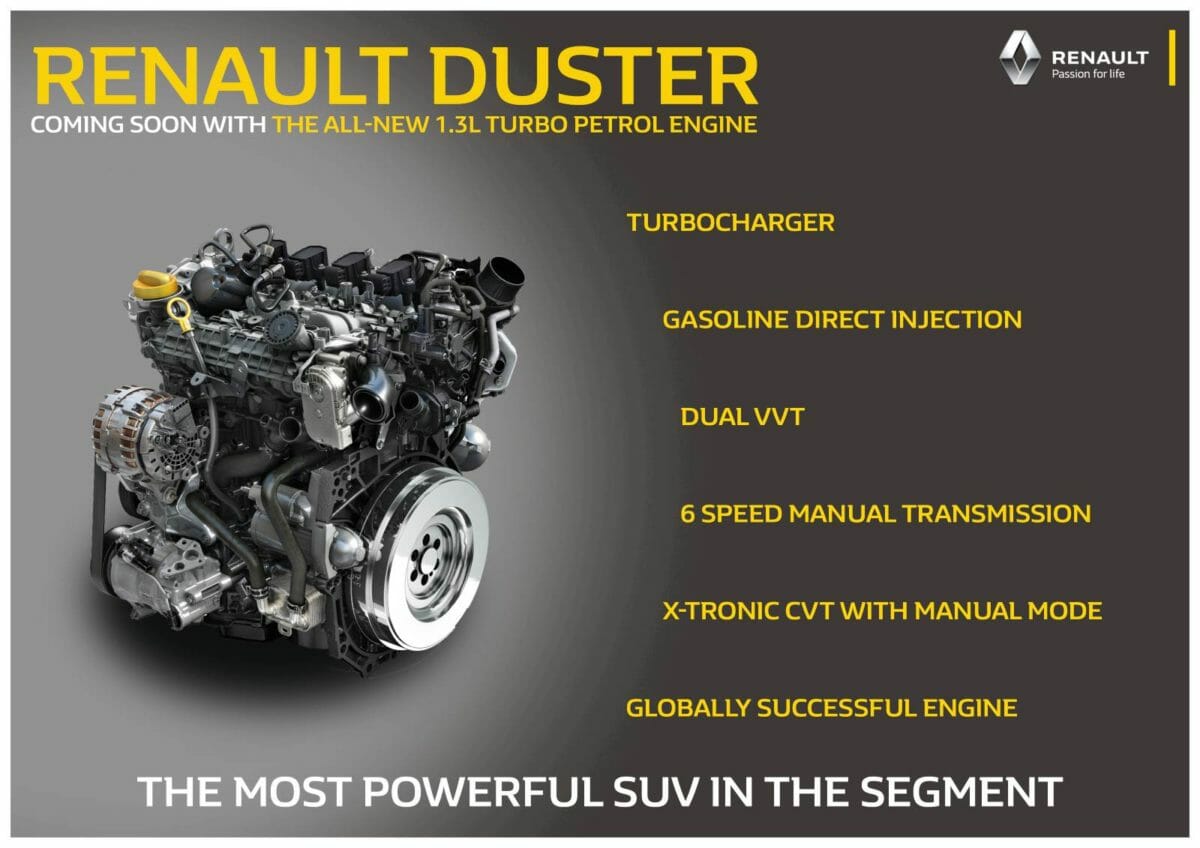 This engine will be offered with either a 6-speed manual gearbox or a CVT automatic. We believe this engine will be offered for the top-spec RxZ trim, while lower trim levels will continue with the 1.5-litre NA petrol engine. The introduction of the turbo petrol motor will make the Duster, along with the Kicks, one of the most powerful petrol SUVs in the segment. In terms of prices, the current top-spec Duster asks for INR 9.9 lakh ex-showroom. With the introduction of the turbo petrol engine, expect a hike of anywhere between INR 1.5 – 2 lakh, depending on the transmission option you choose.

First showcased at the Auto Expo 2020, to highlight the SUV’s sporty intent, the Duster Turbo Petrol will feature red highlights in the front grille, the fog lamp housing and on the Duster lettering on the tailgate, a chrome-finished exhaust finisher, contrast black roof rails, 17″ alloy wheels and a projector headlamp setup with LED DRLs. 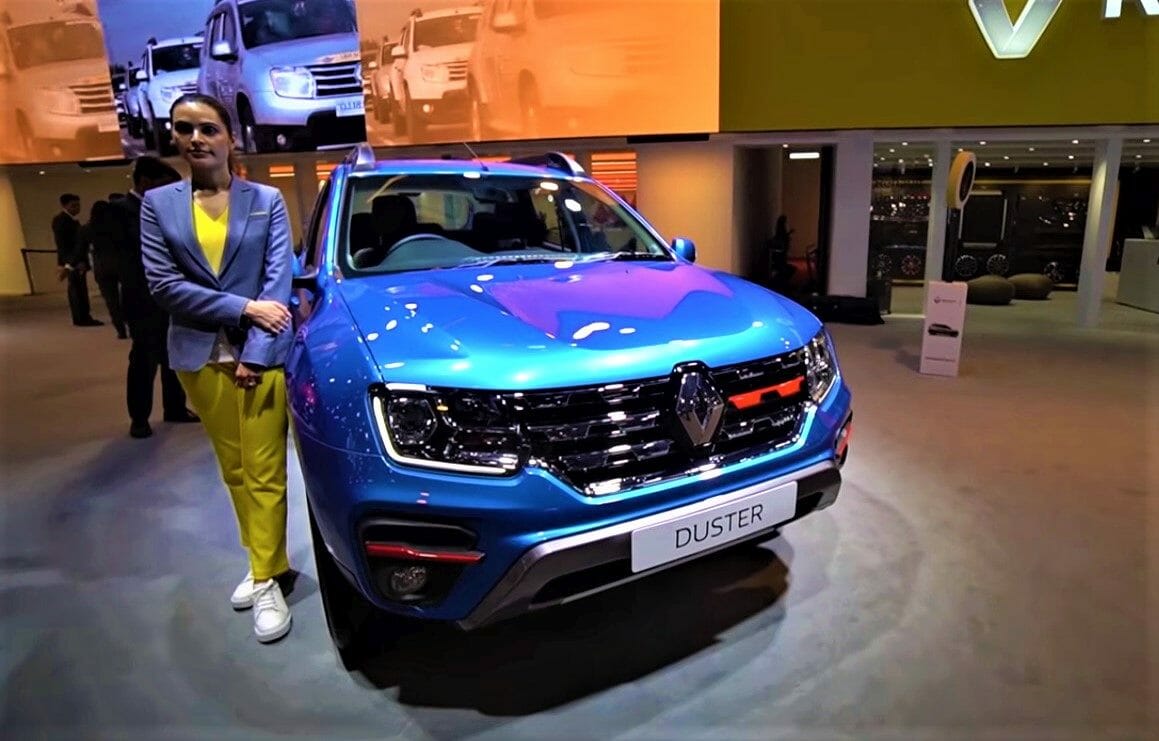 The cabin will be a dual-tone affair, draped in midnight black and stone grey, while the fabric seat upholstery will feature blue stitching. The equipment list will be added with features such as a start/stop feature for the engine, remote cabin pre-cooling, automatic climate control, cruise control with speed limiter, dual airbags with ABS, ESP and Hill Start Assist, and an 8.0-inch touchscreen. 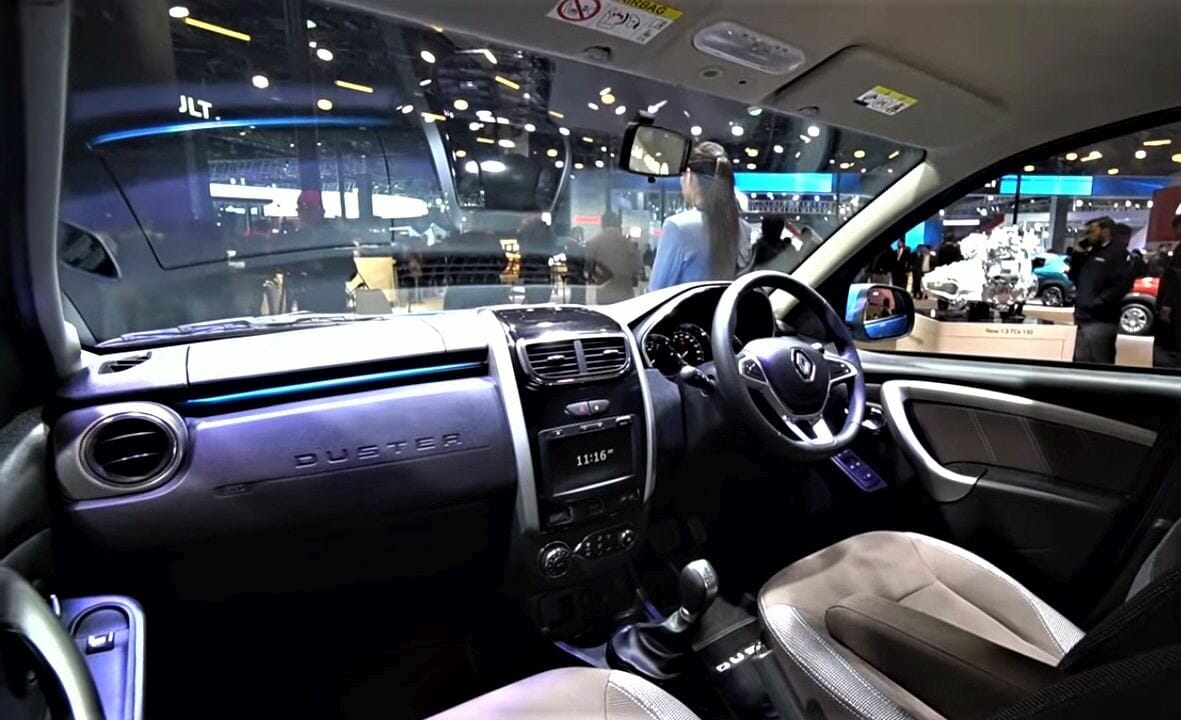 Renault India recently announced the addition of 17 new sales and service touchpoints, which include 14 showrooms and 3 workshops across India. The network expansion is part of a strategic business focus to grow the brand across existing and emerging markets.

The new facilities are located in Himachal Pradesh (4 facilities), Telangana (3 facilities), Rajasthan (2 facilities), Uttar Pradesh (2 facilities), Delhi, Punjab, Andhra Pradesh, Assam, Tamil Nadu and Maharashtra. The new facilities have been opened between the months of April and July this year. With the inauguration of the new dealerships, Renault’s network has expanded to more than 390 sales and 470+ service touchpoints, which include 200+ Workshop On Wheels locations across the country. In 2019, with the launch of its new offering, Triber sport utility vehicle, Renault had introduced the strategy to expand its reach in rural and semi-urban markets to boost sales of its mass-market products. In terms of volumes, Renault’s Kwid is the most popular entry-level car after Maruti Suzuki’s Alto.