Home News Red Rooster Racing wins at the Malaysian round of the 2010 Asian GP! 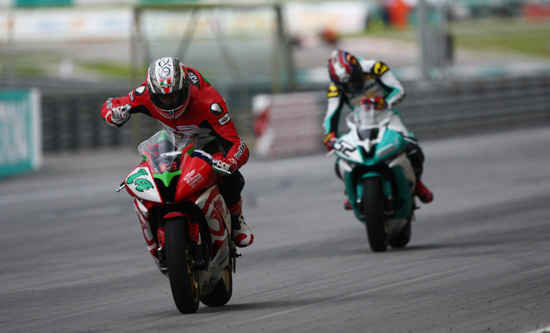 Australian rider Glen Allerton of Red Rooster Racing-India, drew first blood in the 6-country Asian GP today as he captured the top spot at the first round of the FIM Asian Road Racing Championship, better known as the Asian GP, at the Sepang Circuit, Malaysia. With this win, Allerton stands at top slot with 45 points and is now the red-hot favourite for coveted SuperSports 600cc title.

Second on the chart was Md. Zamri Baba of PETRONAS Yamaha Malaysia with 38 points followed by Chalermpol Polamai of PETRONAS Yamaha Thailand with 34 points. The other Indian sponsored team Moto-Rev India and the Chinese MotoGP team were behind the podium finishers. The other two Red Rooster riders, Takahiro Fukami and Rajini Krishnan, took a commendable 11th and 14th place respectively, adding to the Red Rooster tally.

This is the first instance when an Indian team has cut through the international echelons of motorcycle racing to resoundingly establish a presence at the top, right at the beginning of the season. The round comprised of 2 races, conducted under challenging conditions that also lashed the Formula1 round a few weeks ago.

2009 Champion Chalermpol grabbed his first chequered flag for the season after an intense race under the blazing hot Malaysian sun, completing the race in 28:26.841s followed by Glen (28:26.915s) and Zamri (28:27.315s). The race kicked off with Zamri in the lead, hotly pursued by Allerton and Ahmad Fuad Baharudin. At one point in lap 3 Fuad managed to overtake Glen but soon lost the position in the next lap only to find Chalermpol trailing right behind. Chalermpol then took down Fuad in the next lap, Allerton in lap 7 and Zamri in lap 8 – both at turn 1 before crossing the finish line thus ensuring a good start for Chalermpol in his defence of his SuperSports 600cc title this season.

Armed with a vengeance, Allerton and Zamri went toe to toe and all out in the second race despite it being wet. However, after a dramatic battle with Zamri, it was the Australian who walked away with the chequered flag with a time of 32:10.263s. Zamri (32:10.520s) settled for second place while Japanese rider, Inagaki (32:28.013s) came in third. The wet tarmac at first seemed to have a big impact on the riders as they took the turns rather slowly. Zamri took full advantage of the situation and surpassed Decha who was in lead in the lap 2 at turn 1 and then created a massive gap. However, Allerton was quick to catch up. He soon passed Zamri and created a comfortable gap for himself but Zamri retaliated and caught up in the last five laps. This was where all the drama happened as both riders stretched themselves to outdo each other before Allerton put an end to the chase with a risky move, cutting in from the inside at the second last turn. 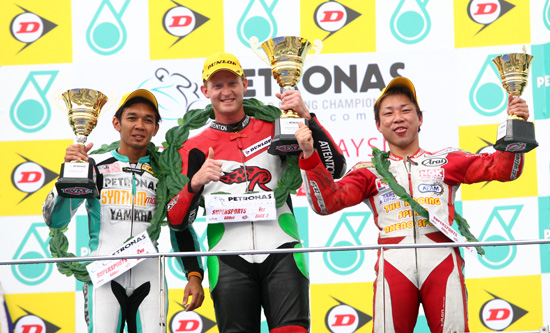 At the press conference, a satisfied Allerton said, “It was a great race today and I felt really comfortable on my bike. When I was in the lead, I missed the pit-board a couple of times and that was when Zamri caught up to me. All in all it was a great race and I had a good outing. I knew my contenders were good but I did not expect them to be this good and I’m looking forward to the race in Japan next month.” Allerton is not the first international rider to represent Red Rooster.

Dinesh Reddy, Managing Director of Team Red Rooster Racing was ecstatic at this historic achievement and said “This is a historic win and a first step for greater things to come. And achieving this only in our second year at this premier and the most competitive event is a feat in itself. I congratulate the team and wish them all the best for the next race in Autopolis, Japan. I had full confidence in the team and they have given us enough reasons to believe that we are on the right path. My next aim will be to see an Indian rider achieving the same feat and create one more first and bring laurels to our country”. Under the guidance of technical director Andrew Morrice and team director Amit Sandill, the team was backed by famed Dutch data engineer Torleif Hartelmann, who is known for assisting many a world champion.

Moto-Rev India, the Chennai based international racing team made its debut in the 2010 PETRONAS FIM ASIAN GP. In its first performance itself, the team reflected excellence. The team is a fusion of international talent traced from places like Japan, China, Singapore, Malaysia, Australia and India, the team managed to finish 7th and 8th in race 1. Makato Inagaki and team mate Toshiyuki Hamaguchi finished 7th and 8th respectively in a grid of 21 riders in all. In race 2, the team managed a podium finish with Makato Inagako in the third place. The race 1 however wasn’t in favor of the only Indian, Dilip Rogger and he had to abandon owing to an overheated engine. To add to the misery, Dilip had to crash at Corner 2 (C2) in the Race 2 due to wet conditions. Unfortunately, he suffered multiple fractures on his right wrist and will have to undergo surgery which will keep him inactive for about 3-4 weeks.
Moto Rev India managed to achieve the 3rd and 4th positions in combined qualifying sessions. Dilip Rogger set a time of 1:09:974 which was beaten by team mate Toshiyuki Hamaguchi at 1:07:943 which kept him at P3. Toshiyuki Hamaguchi made a comeback in the championship after 18 long months owing to a severe back injury which occurred after a crash earlier in 2008. With a lap time of 1:11:252, Dilip managed end up at P22.
The team races with the YEC RACE-SPEC YAMAHA YZF-R6 which has been tweaked in Japan by its championship winning technical team including Victor Lim, Chandra Mohan, Mak Kin Sum and Tsunetaka Igami. The team may have had to face initial setbacks but better performance is expected from the team in the future owing to its capacity to secure podium finishes.
Page 2 of 2
News
,
Comments
Leave a Reply Cancel reply