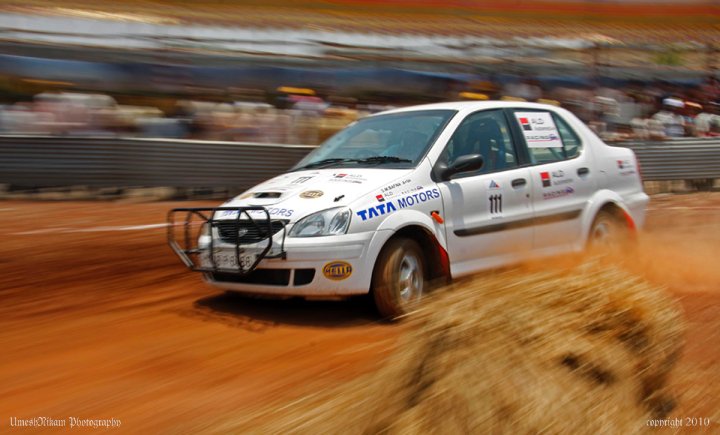 Pune Automotive Racing Association (PARA) had organized a one of its kind motorsports event including Dirt Track racing and Autocross on the 2nd day of May, 2010. The event was held Shah Property, Behind Fire Brigade Ground, GangaDham Chowk, Bibwewadi – Kondhwa Road, Pune. The city witnessed a 2 wheeler and 4 wheeler event after quite a long time. PARA had received 95 entries in 2 Wheelers and 65 entries in 4 Wheelers. Participants who participated in this event had hailed from places like Mumbai, Nashik, Satara, Kolhapur, Ahmedabad and Aurangabad. The event was inaugurated and flagged of by Hon. Mayor Rajpal Singh and Police Commissioner Satyapal Singh respectively.

7 classes including Foreign Open, Indian Expert, Indian Novice, Collegiate, Scooters, Ladies and Bullet made up the Two Wheeler event. The event was dominated by a city lad named Pinkesh Thakker who won the Indian Open class after facing a tough competition from Vishal Barguje who rode a Kinetic Honda in the Scooter Class. Pinkesh rode a Yamaha RX. The Foreign open winner was Badal Doshi who hails from Mumbai. Urvashi Patole and Ashiwarya Barguje were the dominant names in the ladies class astride the sponsored Mahindra Rodeo. Mandar Partakke won the Collegiate Class and was followed by Vijay Bhairavkar who was the runner up and Zohaib Ahmad who was the second runner up.

The 4 wheeler events were run with the dominance of Sanjay Takale (Pune), Sanket Shanbag (Satara), and Byram Godrej (Pune) who are all participants of the Indian National Rally Championship. However, Sanjay has established his name as a winner in various international level rallies while Sanket has been a former 1600cc National Champion. Sanjay Takale bagged the wining position for the up to 1400cc and 1400-2000cc class. Sanjay also finished 3rd in the SUV and Gypsy class. Sanket Shanbag won the Gypsy class while Byram Godrej won the 2000cc + class. Benz Paulose is a rather new face, but won the SUV class in a TATA Safari. He also finished 3rd in the up to 1400cc class. The ladies class consisted of 6 participants out of which the winner was Manisha Fernandes from Mumbai. She was followed by Pune’s Prachi Shah and Reshma Lalwani who finished 2nd and 3rd respectively.