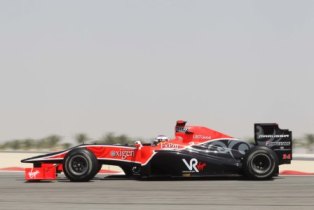 Virgin Racing’s duck at the F1 circuits continued as their season seems to have hit another roadblock. Other than their torrid time with the running of the cars and their inability to complete the race; another revelation has come to light. Their fuel tanks seem to be too short to be able to see them through the end of some races.

Other than that though their poor form continued at the Australian Grand Prix and both their cars started from the pit lane which allowed them more time to work on their machines which have proved to be suffering from teething problems.

However, despite this both cars seemed to have started the race reasonably well even though the wet conditions made it difficult for a lot of drivers to stay on track. Having not become victim to the conditions and managing to keep away from the hoard of cars that went off track, both the Virgin racing cars seemed to have dodged the early race mess and seemed to be running fine.

However, this was short lived as fate had other ideas. Lucas di Grassi’s car faced a hydraulics problem once again clearly showing that the technical staff still has a lot of work to do on the performance of the car. Timo Glock too suffered from problems with the left rear suspension causing him problems just 15 laps from the end of the race.

The drivers have got to be wondering when they will get a car that will see them to the chequered flag. Despite having two young drivers and Lucas di Grassi making his F1 debut this season it has been the car that has let the driver’s down in both racers.

While it has to be said once again that this is a debutant team, they have certainly got to look at fixing their problems fast. No one expects the car to compete with the likes of Ferrari and Mclaren but the least that the car is expected to do would be to complete the race. The debutant teams should look to compete amongst themselves and for the moment Virgin seems to be missing the cut.

No doubt it is still early times in the season and a lot of things can certainly change but one certainly hopes that the Virgin Racing team manages to get their act together sooner rather than later.