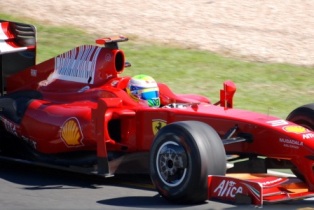 Felipe Massa has certainly made a strong start to the 2010 F1 season. The Australian Grand Prix saw him finish on the podium yet again. This has been the best result that Felipe Massa has had Down Under and is his best start to an F1 season yet.

During the Australian GP qualifying, Massa failed to impress by securing a lowly 5th place on the grid. However, the start of the race proved to be pivotal with the wet conditions and slippery track. Massa was able to make a strong start to the race managing to jump to second place during the first lap itself with race leader Vettel firmly in his sights. Having started the race with a lot of promise things were certainly looking up for Felipe.

However, Massa could not hold on to his second place during the race as the car struggled for grip. Though he managed a podium finish, it was purely due to team tactics than his race pace.

Though Ferrari showed consistent race pace, Massa failed to catch the lightning quick Kubica who made the most of the conditions by racing fast and having good race strategy. Kubica certainly pushed his Renault to the limit as he managed to snatch a good second spot in Australia. Jenson Button almost made a mess when he decided to switch his intermediates with racing slicks a lap before the entire grid. What most thought was a blooper in tyre strategy turned out to the most decisive move in helping Button clinch his first race with Mclaren.

While Massa managed to finish third, credit should be paid to his team-mate Fernando Alonso for finishing a respectable 4th. Alonso had a first lap, first corner spin that relegated him to last position. He fought his way up the grid to finish 4th.

All in all Massa was delighted at the outcome finishing the race in third position; his best effort in Australia and with this he stands at 33 points just 4 points shy of his teammate Fernando Alonso who currently leads the driver’s championship.

Ferrari have made a good start to the season and have a fast and reliable car to their disposal. What remains to be seen though is whether Massa will feel the heat from the pressure being applied by teammate Fernando Alonso.

For now though Felipe can rejoice and celebrate his good performance at Australia and his strong start to the season. But with Fernando breathing down his neck and inkling away at Massa it remains to be seen how Massa will react. It also will certainly have an impact on the team if both the drivers stay very competitive and it would be interesting to see where the team loyalties will lie.