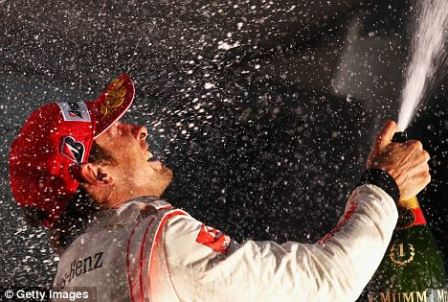 In only his second race for McLaren, Jenson Button claimed victory in Australia. Championship points aside, this is more of a psychological victory for Jenson. He has justified his world title to his fans, his move from Brawn to his critics and also his wits against Hamilton’s talent to McLaren. You could see the uncontrollable emotions on his face in the post-race press conference. “Right now, I just want to run around and scream. It’s the most amazing experience.”

Both McLarens started the race on intermediate tyres. The track was wet at the start, but began drying soon after. At turn one, we had three world champions side-by-side merging into an impossible formation. Alonso left no room for Button on the inside. Button refused to back off. They touched. Button was on the grass, Alonso spun around chipping a part of Schumacher’s front wing. Button rejoined a few places down, right in front of Lewis Hamilton. Alonso was dead last and Michael had to pit for a new wing.

On lap 8, Button decided to pit for dry weather tyres. In real-time time, it actually looked like a pretty stupid decision, especially when he went off track right after coming out of the pits. A couple of corners later he had the car under control, and a couple of laps later, he was gaining seconds over those ahead of him. Inspired by his lap times, Renault decided to bring in Kubica for dry tyres, and everyone else soon followed suit. 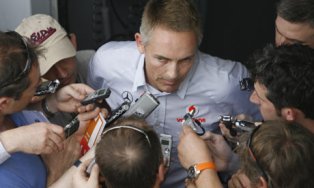 As revealed by Button and Martin Whitmarsh later on, the decision to come in for tyres was entirely Jenson’s. In his own words, “I think it is a lot easier for the drivers to feel the conditions. The team can see it on TV with the clouds coming in, but we can feel out on the circuit what is happening.” We have seen numerous races where a driver (or team) has taken the bold decision to come in for dry tyres before the rest of the field, and ended up doing 3-4 seconds slower than everyone else. Ferrari sent Kimi out on full wet weather tyres on a dry track last year and lost him the race. Weather prediction satellites are not yet as accurate as a seasoned driver’s instincts. The rare occasion when a team has allowed a driver to make such a call, has been either out of desperation for points, or in teams with nothing to lose (Minardi, BAR, Jordan, Force India, even Ferrari and McLaren when they were struggling at the back of the field).

It’s unfair to say that Jenson got lucky. He knew what he was doing. McLaren is not the sort of team to support a driver’s decision if it seems even remotely stupid. But changing tyres was the easy part. Jenson then went on to do 51 full laps on the soft-option Bridgestones without having to make a second stop. That was what ultimately won him the race.

He was the first to pit for fresh tyres (other than Schumi who needed a new wing….but he ended up doing 3 pit stops). Although Kubica and the Ferraris also did a one-stop race, they had fewer laps to complete, and were visibly struggling with their tyres towards the end of the race. Both Massa and Alonso were slipping and sliding in the closing laps when Hamilton closed in on them. Jenson controlled his tyre wear for over 30 laps, and then began to push towards the end to open up the gap to Kubica. The only luck that Jenson Button had on Sunday, was Sebastian Vettel’s brake failure. If not for that, Jenson could not have won. 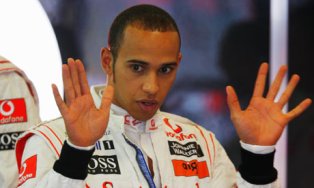 I have very little to say about Lewis Hamilton. He drove an awesome race. It was an inspired drive, with loads of guts and overtaking. But no brains. And then he made it worse, by complaining to the media and blaming his team for the wrong strategy. Puberty is not the only qualification for being a man. Hamilton neither questioned his team’s decision, nor had the experience or the balls to make his own. Martin Whitmarsh has revealed that they called him in for a second stop based on data from Mark Webber and Michael Schumacher’s pits stops and their lap times thereafter. And don’t forget, Lewis was burning up his tyres with all that awesome driving, while Button was maintaining a steady pace. Hamilton’s tirade against his team in front of the media is rare, and probably a sign of distrust and fear of equal treatment. The same fear which led Michael Schumacher to so carefully draft his contracts with Ferrari.

I’m very very exicted, for we will hopefully see a repeat of 2007. But Button is not Alonso. He will neither indulge in, nor be affected by mind games. And with both Anthony and Ron no longer in the paddock, baby Hamilton will have to face this one on his own. My pre-season predictions don’t seem that irrational anymore.