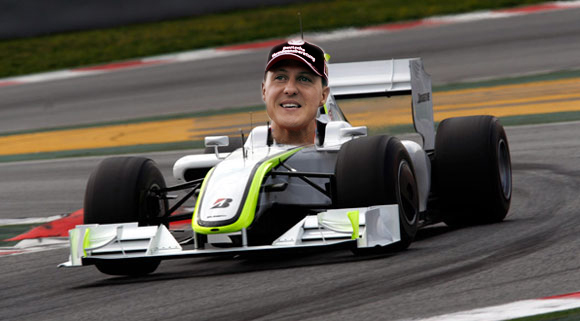 Look who’s back! The Seven-time world champion Michael Schumacher, Ferrari F1’s poster child is back to the Formula 1 circus. If that isn’t news then the fact that his return would be under Mercedes GP (Brawn) banner is certainly a shocker for all the Ferrari fans.

Schumacher reportedly signed the contract on Tuesday at Mercedes’ headquarters in Brackley. He now will be a part of an all-German racing team alongside team compatriot Nico Rosberg, 24, who signed up with the Brawn GP Formula One Team last month. Sources reveal that Schumacher will be paid Seven million Euros (Rs. 42-crore approx.) to be on the grid when the new season starts with the Bahrain Grand Prix on March 14 2010. Extension of the current one-year contract will however depend on the way the 2010 season ends for Schumi. But with the German back with his mastermind hero, Ross Brawn, we are pretty sure that there will be a lot of fire works in 2010.

Ferrari President, Luca Di Montezemolo who has been working with Schumacher since 1996  admitted that he would have liked to see Schumacher back in a Ferrari; but with Massa and Fernando Alonso already on their books for the upcoming season, he simply could not offer the German a drive. Incidentally it was Di Montezemolo who first suggested to Schumacher he stands in for the injured Massa after the Brazilian’s horrific crash at the Hungarian Grand Prix in July.

So much for the news that Ross Brawn dismissed as a mere “speculation” some time back!