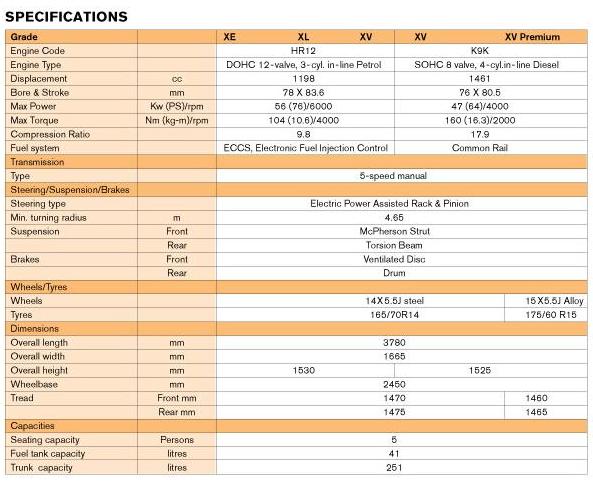 Nissan Motor India has officially revealed the specifications of the 1.5-litre dCi diesel Micra. The 1461cc diesel engine of the car, which it shares with the Logan sedan, albeit in a different state of tune produces maximum power of 64PS @ 4000rpm and peak torque of 160Nm @ 2000 rpm. Those figures may not be very enticing for a performance buff, but with a class leading fuel efficiency of 23.08 (ARAI), they should bring a smile on the faces of the economy conscious buyers.

Also, the peak torque being produced at a lowly 2000 rpm, we can expect the car to be extremely driveable within the city – a trait which is more important for a city car like the Micra, than outright performance.

The on-road prices (Chennai) are Rs.6.45 lakh for the XV variant and Rs.6.90 lakh for the XV Premium. The main difference between the two variants is that XV Premium comes with a start-stop button and alloy wheels.