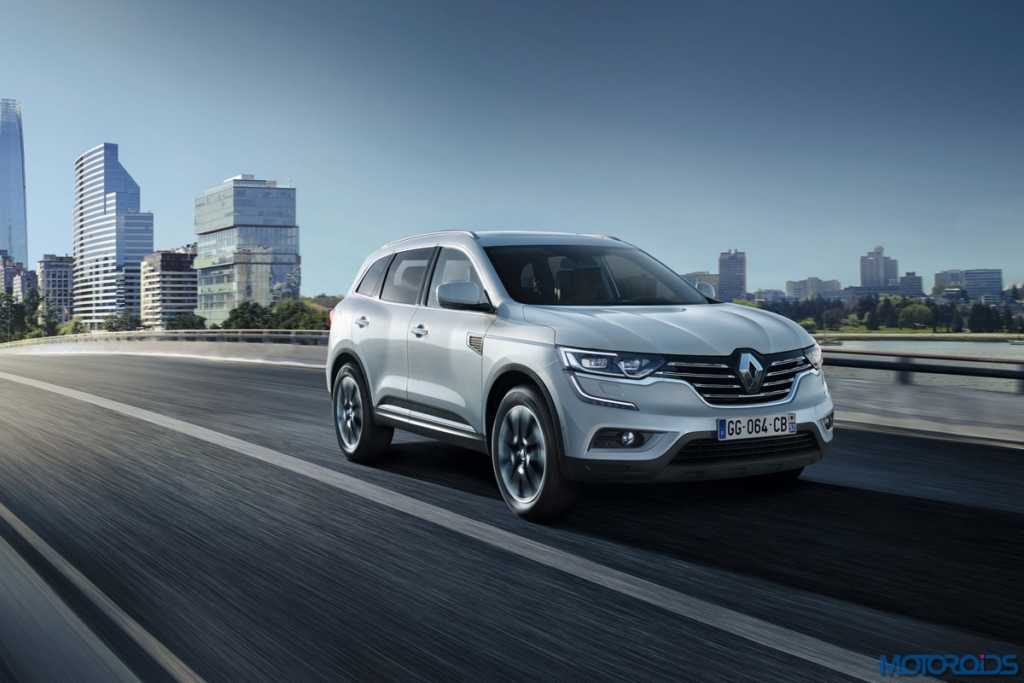 The next-generation Renault Koleos has been revealed at the ongoing Auto China 2016 in Beijing.  The new KOLEOS is destined for a global audience, with sales beginning in the
third quarter of 2016 in Australia, Turkey, the Gulf states and some Latin American countries, followed by China at the end of 2016, then Russia and Europe at the beginning of 2017. 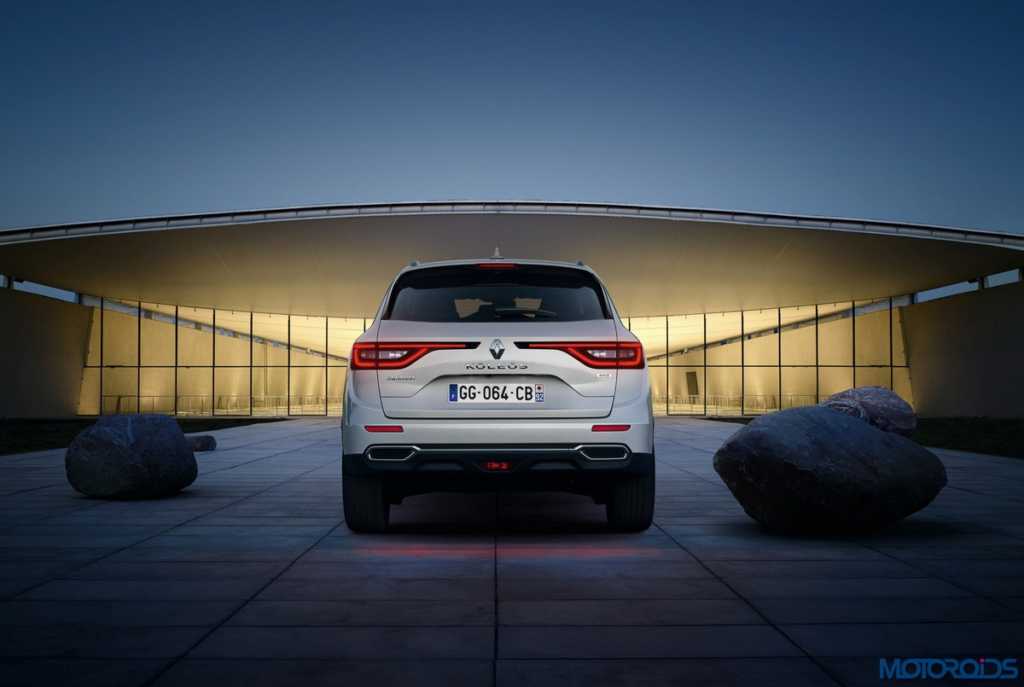 The new KOLEOS’s styling is in line with Renault’s new design strategy introduced by Laurens van den Acker, and eschews the new face of the brand as seen on the Talisman series and the next-generation Megane. The taut bonnet lines culminate in the presence of several chrome embellishments, including strips that run from the head lights along the full length of the wings. Then there are the full LED Pure Vision head lights (depending on version) that are 20 percent more powerful than a halogen beam, Daytime Running Lights (DRL) and permanently-lit tail lights feature Edge Light technology, which generates a clear, bright 3D effect. 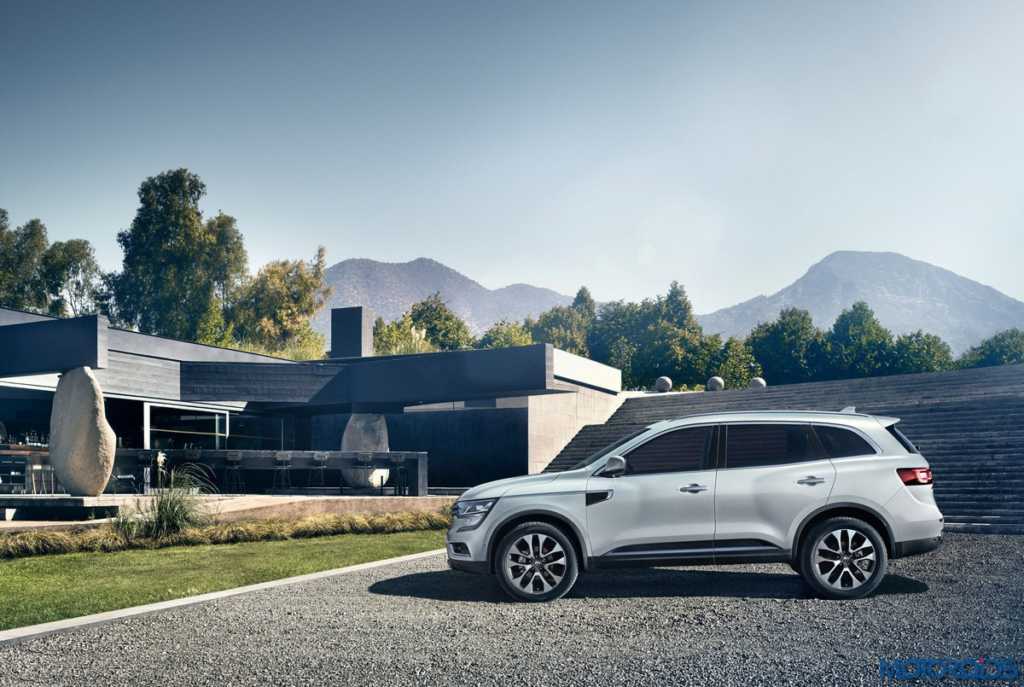 The KOLEOS’s 2,710mm wheelbase – for a total vehicle length of 4,670mm – counts amongst the longest in the class and, according to Renault, allows the new KOLEOS to boast record-breaking interior space to position itself as a D-segment SUV. At the rear, the wide, horizontal tail lights zero in on the Renault diamond logo on the tailgate, while chrome inserts set into the lower part of the rear bumper take the shape of twin exhaust tail pipes. The KOLEOS measures 1,840mm wide. Being a SUV, the new Koleos also features door protective moulding, large-diameter wheels (up to 19 inches), and aluminium roof bars. Meanwhile, keeping the SUV character intact, the Koleos also sports a high ground clearance (213mm) and approach and departure angles of respectively 19 and  26 degrees. 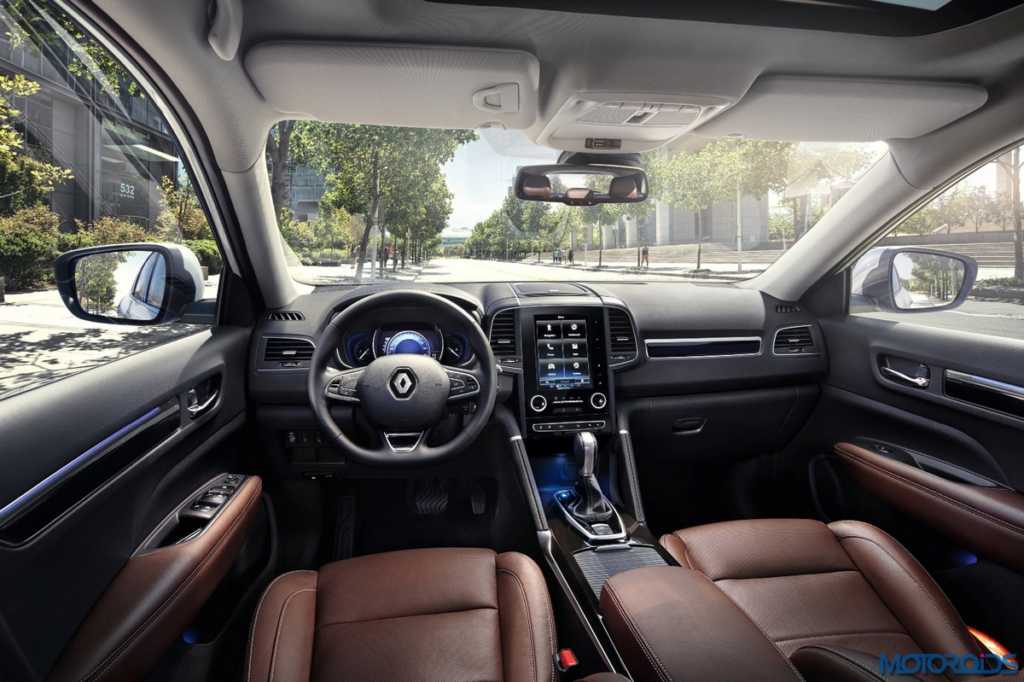 Compared to a traditional sedan, the new KOLEOS’ driving position is 150 mm higher, while the tall, wide dashboard reinstates the SUV-ness from the inside. The line stretching from the top of the dashboard to the rear of the armrest is one of the highlights of the new KOLEOS’ interior configuration. Hand grips on either side of the centre console echo the world of off-road motoring. The front seats of the new KOLEOS draw their inspiration from those of the Talisman, and feature dimensions that figure amongst the very best in class, along with variable density foam for added comfort. Depending on the version, the new KOLEOS’ front seats benefit from six-way power adjustment, power lumbar adjustment, heated cushions and heated seat backs, with a choice of two temperatures, apart from integrated ventilation to lower the temperature in hot weather. Furthermore, the rear of the seat comprises a flexible yet resistant semi-rigid shell that frees up extra room for rear passengers. 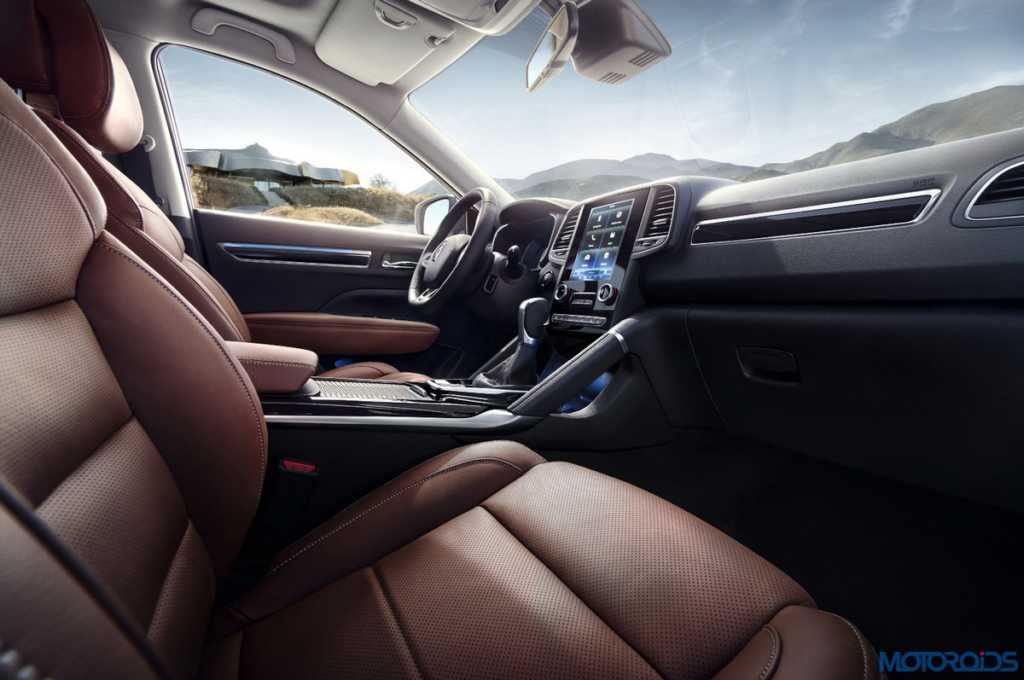 The second row seats can be heated, with a choice of two temperatures. In addition, there’s class-leading rear knee room of 289mm. The new KOLEOS also boasts 624 litres of boot space, plus a removable floor positioned at the same height as the boot, which forms a flat floor. Handles located inside the boot enable the 60/40-split rear bench seat to be folded
in an instant, freeing up a total carrying capacity of 1,690dm3 VDA. There’s 35 litres of additional stowage, including an 11-litre glove box and a five-litre cubby in the centre console.
Inside, there’s scratch-resistant materials such as satin-finish chrome for the steering wheel, gear lever and air vent inserts. The centre console is covered by a protective film, while there’s cushion-backed materials selected for the dashboard and door panels. The leather upholstery and leather-trimmed armrests feature contrasting top stitching, while the  personalisable LED cabin lighting features a palette of hues ranging from green, to blue, yellow red or violet, depending on the mood of the driver and passengers. 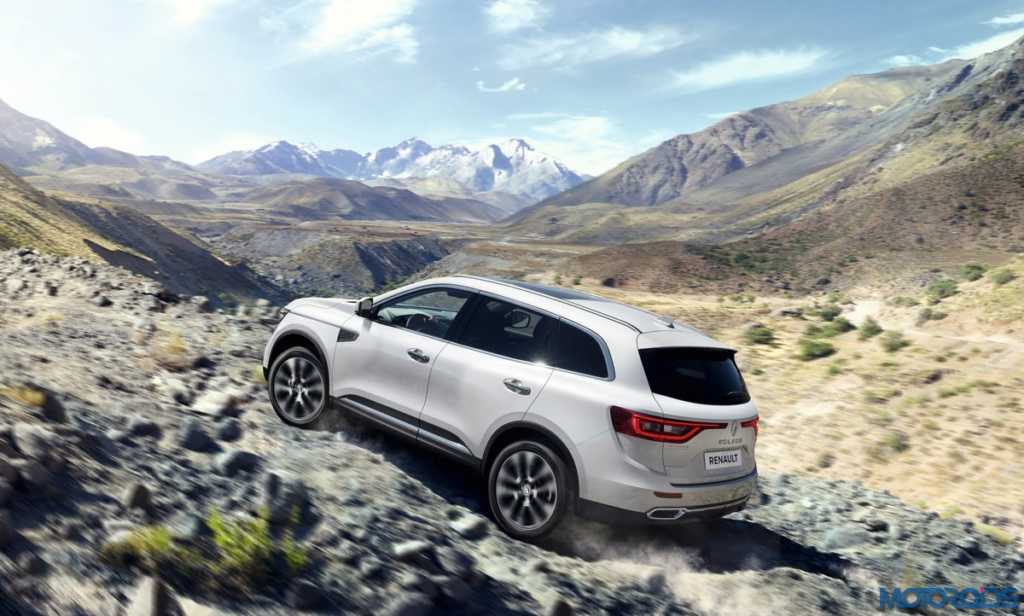 Last but not least, the new KOLEOS’ cabin also features a large, opening glass sun roof (0.80m2) that extends over the rear seats. Connectivity is taken care of by R-LINK 2, a system that serves as a connected control centre to coordinate functions like infotainment, navigation, hands-free telephony, radio and driver aids. Key features include two touch-screen formats; a 7-inch landscape or an 8.7-inch portrait, both with two-finger zoom, page scrolling, drag and drop, etc. Then there’s realistic navigation display with 3D representation of buildings, while connectivity and charging options include Bluetooth for hands-free use of a telephone and audio streaming, a USB port, a 3.5mm jack socket, a 12V power supply and, depending on version, an SD card slot. The navigation system also gets voice recognition, while driving data (speed, RPM, fuel consumption, etc.) is displayed on a personalisable seven-inch colour screen situated behind the steering wheel, in the driver’s line of sight. 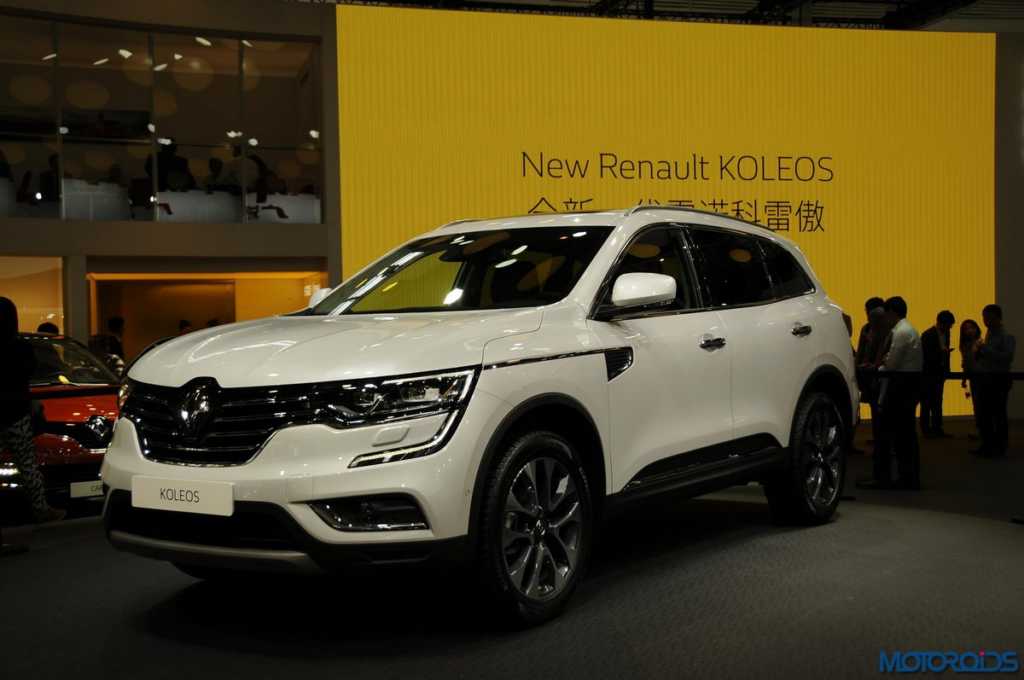 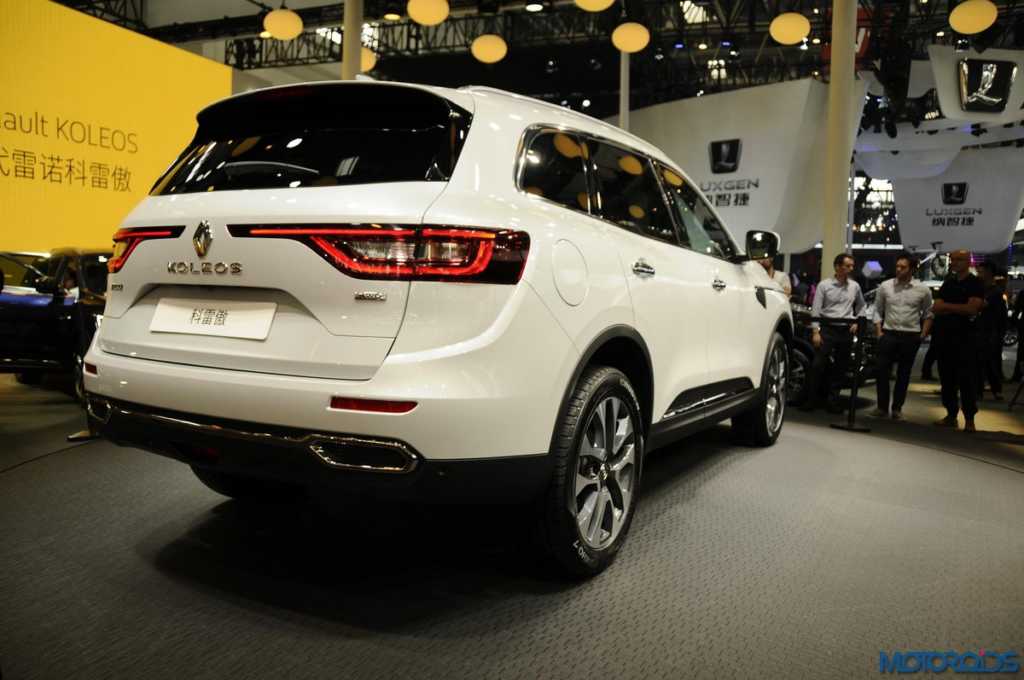 To tackle the rough, the new KOLEOS comes with Renault-Nissan Alliance’s familiar ALL MODE 4×4-i technology. This all-wheel drive system offers a choice between the 2WD (front-wheel drive) and 4WD AUTO modes. The latter automatically splits the torque between the front and rear wheels. At slow speeds in low-grip conditions, a third mode called 4WD LOCK allows the driver to select permanent all-wheel drive. A two-wheel drive version of the new KOLEOS will also be available. The new KOLEOS is built on the Alliance CMF-C/D architecture that is shared by several vehicles, including the Renault Espace, Talisman and Kadjar, and Nissan’s X-Trail/Rogue and Qashqai. The car’s powertrains have also been developed within the Alliance. Depending on the market, the new KOLEOS will be available with a choice of two petrol and two diesel engines with power outputs ranging from 130 to 175hp (96 to 127kW), mated to either a six-speed manual gearbox or X-Tronic automatic transmission.