The Next-Gen Hyundai Elantra has been spied in South Korea. A camouflaged test mule of the sedan was spotted on the roads of the parent nation of the car manufacturer. 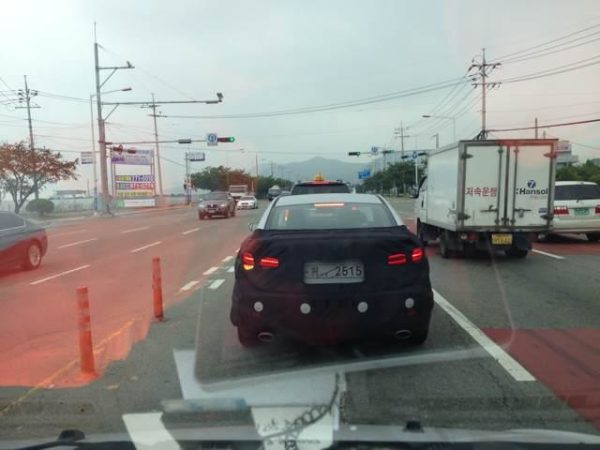 This could probably be the first ever sighting of the Next-Gen Hyundai Elantra in the open. The new Elantra was supposed to be unveiled in the second-half of 2015. However, due to shifting market conditions, the new Elantra’s launch has been shifted forward by a few months to the wee months of 2015. The Elantra is christened as the Avante in certain international markets.

While any information about the design language of the Next-Gen Hyundai Elantra will be purely speculative at this point, it is certain that the car will inculcate some inspiration from the Fluidic Theme of Hyundai. Hyundai calls its new design language the Fluidic Sculpture v2.0, and has utilised it on products such as the Genesis and the Elite i20. The theme does away with the sweeping curves, and replaces them with sharper edges. Nevertheless, a certain degree of curves are retained. All we can notice from the spyshot is that the new Elantra will possess twin exhausts, and a large LED taillamp setup.

Hyundai is looking to improve the performance levels of the new Elantra over the outgoing model. Rumored engine options will include a new GDI petrol engine and a CRDi diesel engine. Could these two new engines be the 1.6 Litre Gamma and the 1.6 Litre U2 diesel engine? We don’t know for sure. But it is expected that the new engines will possess better specifications as compared to the powerplants used on the current Elantra.

Reports have also suggested that an electric variant of the Elantra is in the works too!!

The Next-Gen Hyundai Elantra will boast of significantly more premium interiors, as well as an increased feature list. At about the current time in the last year, Hyundai had launched a facelift of the Elantra. It hasn’t made its way over to India yet. It will therefore be a big surprise if we receive the Next-Gen Elantra a few months after the Korean launch in early 2015.