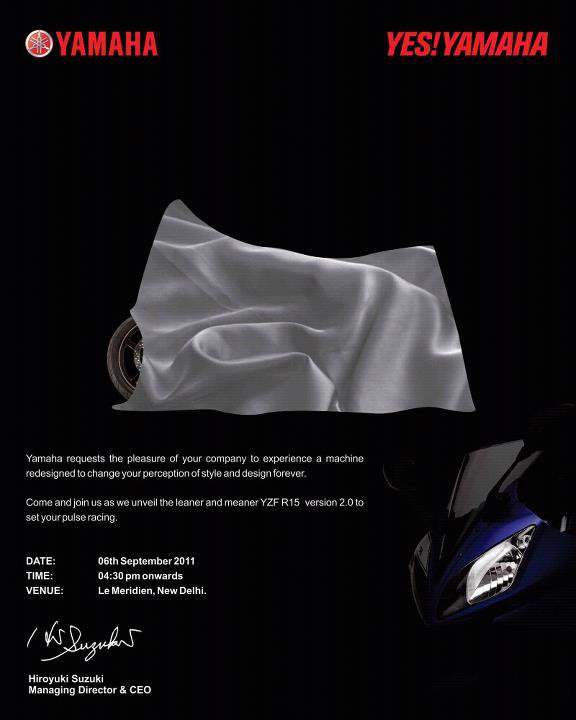 Phew! That’s our first reaction on coming across this news. Yamaha Motor India, which was keeping mum on the launch dates of the new R15 seem to have finally revealed their plans to introduced the first major facelift of the bike after its launch in India. Test mules of the face lifted version have been caught testing on a regular basis across the country for months together now.  Yamaha Motor India, however, have been tight lipped about the bike’s development throughout.

The news is confirmed via an official invite which calls the new R15 ‘the Yamaha R15 version 2.0.’ The invite, signed by company’s India MD and CEO Hiroyuki Suzuki confirms the launch of the bike at 4:00 pm at Le Meridian in New Delhi.

The new R15 will feature a sportier styling, fatter rubber, a split seat, new exhaust, new alloy wheels, a sportier riding position and from what the rumormill suggests, a smaller price tag owing to higher level of localization. That, probably may also have been the reason why Yamaha took so much time with the testing of the R15 Version 2.0. The R15 Version 2.0 also gets a tyre hugger and a black powder coated crankcase.

We have been talking about this new bike since ages now, bringing to you the spy videos, pictures and details on this bike. You can find all the relevant info on the bike in our previous posts listed below.