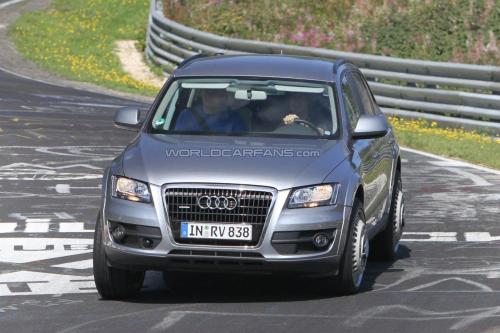 Audi made it clear quite some time ago that they are working on a new platform which is similar to the BMW X6. Audi will get their own version of the radical SUV and will be named the Q6 which will basically be a crossover with the tall stance and muscle of an SUV and the softness of a sedan inside the cabin.

We have got hold of the first ever spy shots of Audi’s next big thing – Q6. Audi will position this car between the Q5 and the Q7. Engine options speculated are the 3.0 lit TDi , 2.0 lit TDi and  the TSFi engines too. Audi has not given any details out on this new model which makes it difficult to give a concrete launch date but Audi might launch this one somewhere around early 2013 or the end of 2012.

With Q6, Audi will answer the X6 in the ‘Q’ way. What we would like about Audi to do is to give it better suspensions unlike the X6. Looking at the spy shots we cannot spot a coupe like roof line (as the test mule is disguised as a Q5) which makes a taller person difficult to sit behind and also hinders the back visibility for the driver. We hope the the Q6 is a more convenient and comfortable car than the X6 which doesnt have much room at the back bench. Being a part of the Q family we expect the car to have off road capabilities similar to the Q7 and Q5. Finally Audi should set the price right, the X6 sounds over priced and doesn’t quite seem to justify the hefty price tag.

What do you think how does the Audi Q6 looks ?