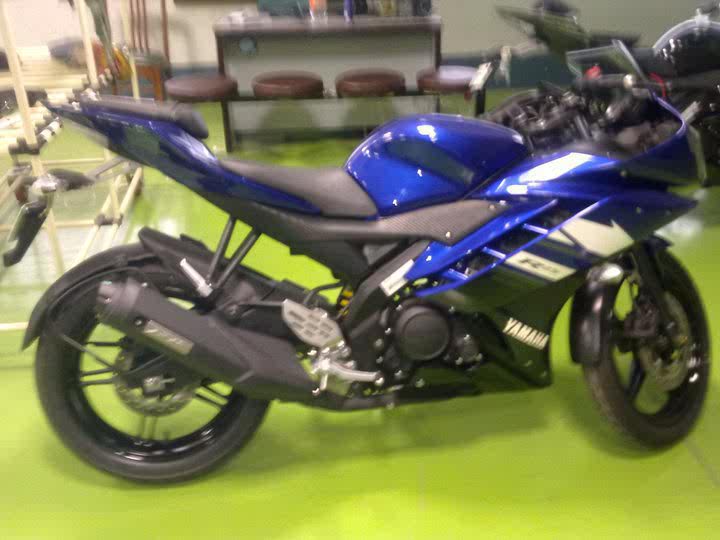 We just cannot figure what’s taking Yamaha India so long to launch this one. It’s a facelift, after all, and not a thorough mechanical overhaul exercise. The new, 2011 version of the Yamaha R15 has been in the news for far too long now. Spy pictures and details on the refreshed version of the bike have been doing the rounds for months together. The bike has been caught in a production ready avatar, with all the stickers and other embellishments in place, suggesting the launch-ready state of the machine. And yet, Yamaha India won’t breathe a word about the new bike. Here’s another picture of this highly anticipated Yammy which has earned itself a lot of respect for its handling prowess and cutting edge tech.

In its newest avatar, the R15 will shun its sobered-down-for-India styling for a more aggressive and sportier styling. The practical pillion seat has been shown the bin for a snazzier and highly impractical step seat. the tail-end is far sharper. The 10 spoke alloys are new, and so is the new exhaust can. The skinny tyres at the rear, which were optimized for minimal drag and rolling resistance have been replaced with meatier rubber to lend some substance to the once malnutritioned rear.

New graphics, and a modified front fairing will be added attractions for prospective customers. If the rumors buzzing around in the web world are anything to go by, the price will also be slashed by a good Rs 10K to make the r15 an even more attractive proposition.

But would that be enough? True, the R15 was the pioneer in India in terms of introducing the cutting edge tech to the mainstream bike customer. But the game has moved on in the past few months. The stakes are higher, as the CBR250R is the new performance benchmark for the value seeking enthusiast biker. Would a cosmetic makeover be enough for the R15 to sustain its desirability? Would you put your money on the new R15 in its latest avatar? Do you think there is a probability of a 250cc engine concealed behind that snazzy full fairing? Do let us your views, and of course, dont forget to share it with us if you have any useful information about the bike!