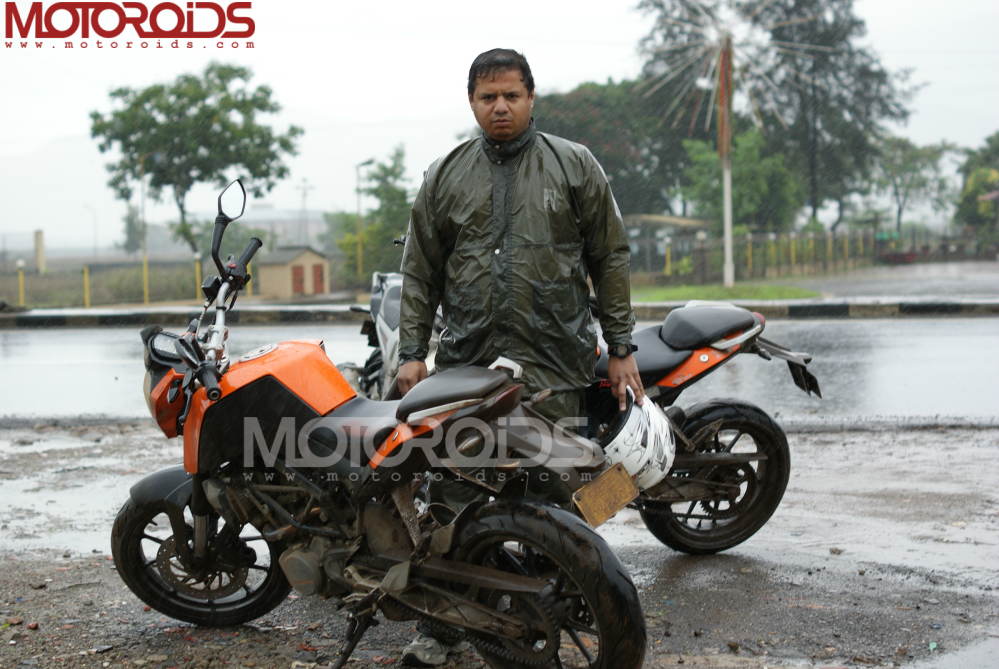 That Bajaj is planning to launch the KTM Duke 200 in India before the year 2011 goes by is not secret. We have been keeping a tab on the development regarding this new bike from the Bajaj-KTM stable. Now, as a new link in the chain, our reader and friend from Pune, Dhananjay Ambekar has managed to click some fresh pictures of this new bike near Lonavala. Our heartiest thanks to him. Thanks to Motoroid Deepak Dongre as well, for bringing these pictures to us. There were not one, but two bikes on test, and were parked outside a restaurant, as the test riders halted for a break. The bikes on test were prototypes and not production models, as there were no stickers on them.

Bajaj and KTM have been working very hard on this 200cc version of the KTM Duke, a 125cc variant of which is already being manufactured at Bajaj’s Chakan plant and exported to Europe. The 200cc bike will boast many firsts for the mainstream market such as upside-down forks and (possibly) a chromium-molybdenum trellis frame. The 200 Duke will most likely share its wheelbase with the smaller 125cc version, measuring 1350 mm. The power from the 200cc liquid cooled fuel injected single cylinder engine would be ‘very close’ to that of the CBR250R, as we revealed to you in our earlier post as well. Expect peak power output of around 22-23 bhp. The engine will most likely be mated to a 6-speed transmission, just as the 125cc version.

The 200’s biggest virtue would be its low and mid range punch, offering great in gear acceleration, easy overtaking and great throttle response. It won’t be an all-out sporty machine with power located in the upper spectrum of the rev band, but would offer a flat power and torque curve with great driveability and ease of use in the city as its virtues.

The images reveal a few other details about the new bike. The single front disc brake is huge in size, but isn’t petal shaped. The elevated step seat won’t make for a very comfortable place for the pillion rider but would lend the 200 Duke great aesthetic value. The handlebars don’t have weighted ends – that’s probably because the Duke isn’t mean to be a sporty, track oriented bike. Rear tyre seems tobe a 150 section unit surrounding 17 inch rims. Front tyre is 110 section. Instrument cluster will be a fully digital unit displaying rpm, speed, trip, odo, fuel and temperature.

Expect a slightly higher price tag than the CBR250R.

Does the KTM 200 make the cut for you over the CBR250R? Would you buy it over the Honda? Why / Why not? You opinion matters… please let us know!