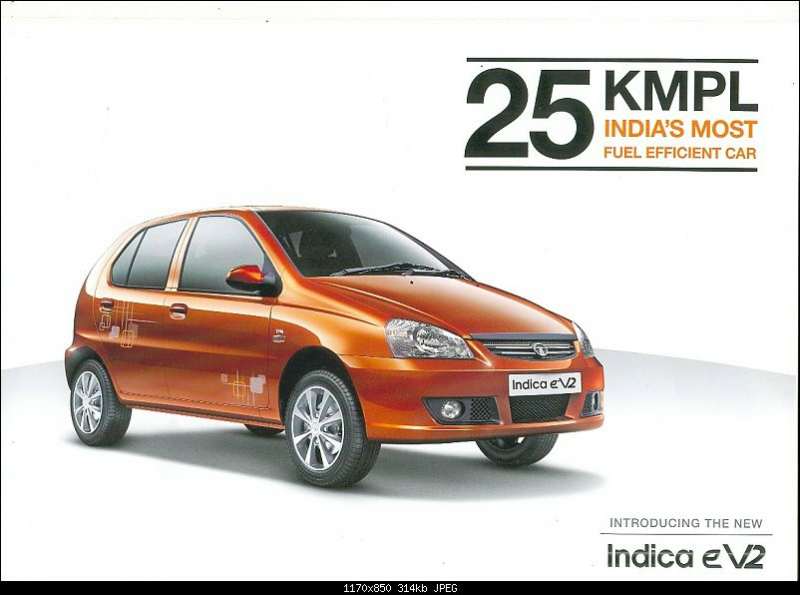 A few days ago we told you about an official release from Tata about a new model of the Indica. The new cars was said to be featuring a new engine with more power, more torque, better fuel efficiency and more features. Now the brochures of the new cars are out in the open, and every single detail is clear.

Tata Motors have named the new version of the car the Indica eV2. The new CR4 engine employed in the car breaks new ground for Tata in terms of engine performance and efficiency. The new engine is capable of producing 76PS of peak power at 4000rpm and 140Nm of peak torque in a very usable rpm band of 1800-3000rpm. The company claims a fuel efficiency of mind-boggling 25kmpl (ARAI certified), making the eV2 the most fuel efficient car in the country.

The car remains largely unchanged in terms of visuals, except for two creases, one under the windows and one emerging from the rear and running across the doors. The huge plastic wheel arches seen on the earlier Indica V2 are also gone now to lend the new version classier, subtler look. There is a new graphic scheme on the eV2 along with a set of new alloys.

Apart from its new engine, the Indica eV2 is home to several new and innovative features. First is the ‘Auto Drive Assist’ which prevents the driver from stalling the car even while releasing the clutch accidently on steep inclines. It happens several times on steep inclines that we have to modulate the clutch and the accelerator with such finesse at slow speeds that the engine stalls. This won’t happen with the new Indica, and you could be sure that you won’t ruin your car’s rump and the front bumper of the car behind while ascending steep inclines at slow speeds.

Another innovative feature is to prevent re-cranking while the engine is still on. Modern engine are so silent and smooth (though that doesn’t apply to all engines, including some of Tata’s own mills) that we sometimes don’t realize that the engine is running and twist the ignition key accidently. The eV2 will require you to have the clutch fully engaged if the engine has to be cranked up, eliminating the chances of re-cranking a running engine.

The eV2 also comes with new 14 inch alloy wheels, a tachometer as standard and 60:40 split rear seats. The music system is Bluetooth compatible along with USB and Aux-in jacks.

The car may be launched anytime now and will be priced close to Rs 4 lakh for the base variant without AC and Power steering, which is good value for a diesel car we would say.