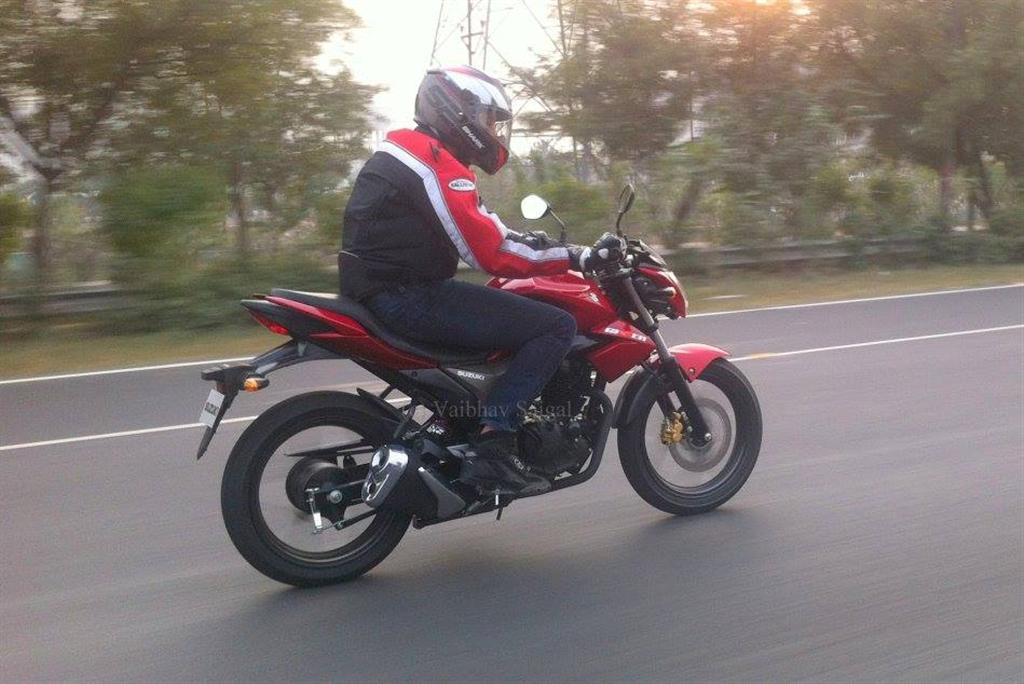 Thanks to Vaibhav Saigal of XBHP (and Akshay Ballal for the tip off on our Facebook page) who spy snapped the new Suzuki motorcycle doing rounds on the NOIDA expressway. Seems a pretty neat motorcycle at first sight and looking at the engine size- it’s most probably a 150cc variant. Cooling fins on the cylinder easily suggests it’s air-cooled, but the twin pipe muffler assembly is a surprising element considering it’s a single cylinder.

The letters GIXER on the tank extension might get you thinking on the bigger GSX-Rs, but we feel it’s a new series thought by Suzuki which coinciding by its performance line of GSX bikes might add a bit of appeal to the motorcycle.

Also it won’t be out of place to assume that this might be a replacement for the Suzuki GS150R which hasn’t been clocking enough numbers on the sales chart for the Japanese manufacturer. A more appealing design and new badge would definitely give a few boosting points to the motorcycle. Also it has been mentioned that the bike was doing around 125 kph when spotted- which means the new Suzuki should pack in more punch that the GS150R and add up on the performance chart. Putting these facts together, the new Suzuki GIXER 150 should appeal to people looking for an everyday motorcycle and when needed would also double up as a decent performer.

And finally, though it might be surprising to spot the motorcycle doing its test rounds without any camouflage hints at a definite possibility of making it’s debut at the India Auto Expo 2014 next month.

We look forward to the drama unfold and what figures roll out from Suzuki’s newest offering.