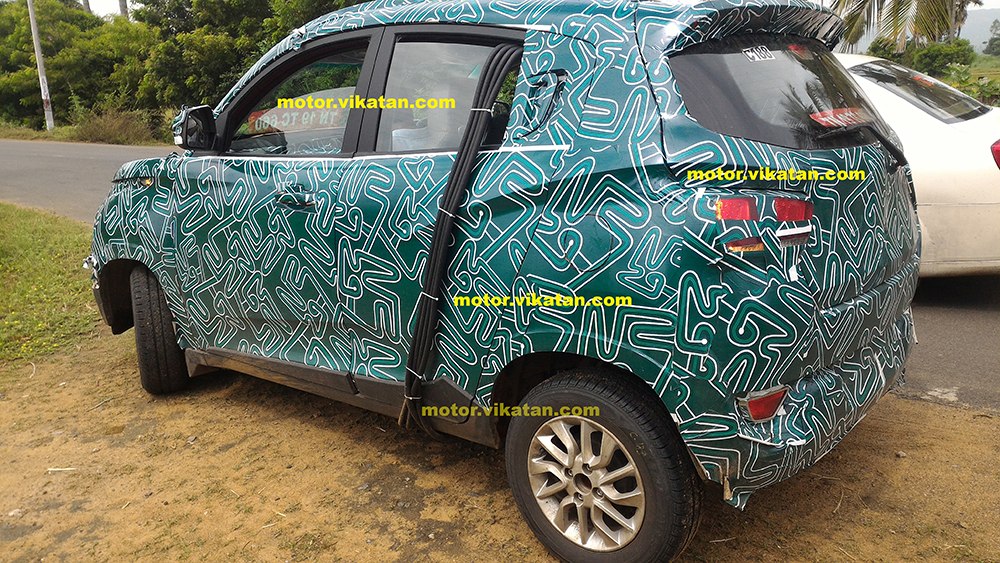 [Update] In the meantime, our readers Harshavardhana Adnur and Hemant Pednekar have sent us some more spy images of the new compact crossover.

The first image, showing the camouflaged fascia of the XUV100 reveals Scorpio like claws on the radiator grille. Unlike the solid shards on the Scorpio, however, these elements on the XUV 100 only have the outer lining in chrome and look quite elegant. 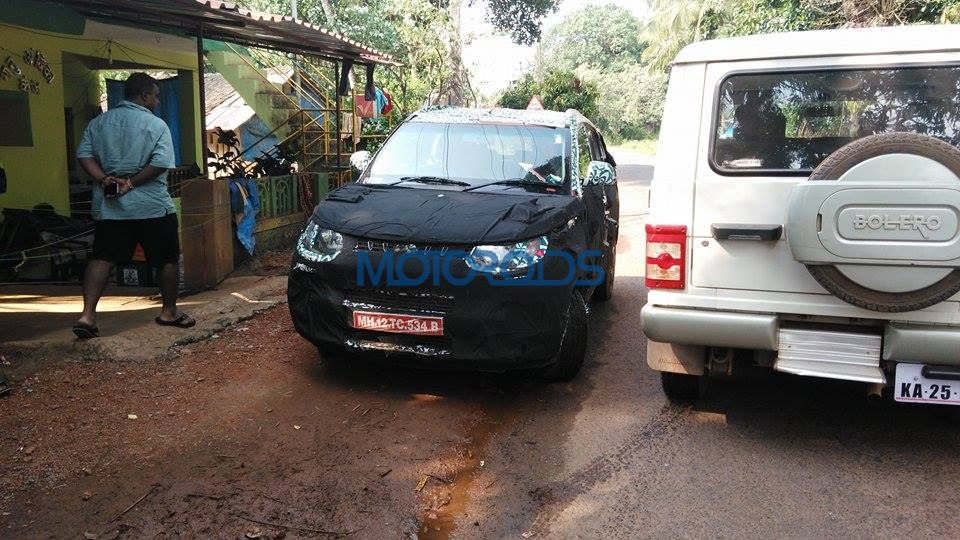 The other set of images shows us a whole bunch of the XUV100s parked on the side of the road. We suspect these are all the different variants to be offered, including the AMT version. An interesting fact is the colour of the alloys for the vehicle in front. While the earlier images in this post feature 6 x 2 alloys in silver finish, the top end variant for car in the new set gets the same design of wheels in a dark shade. Read on for more details about the car’s design 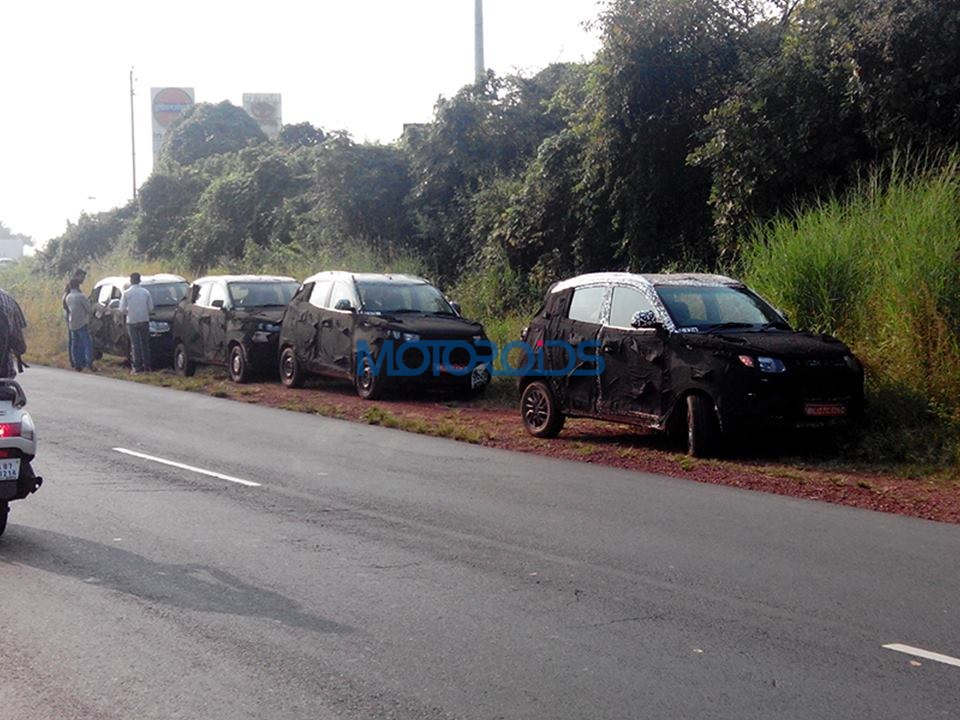 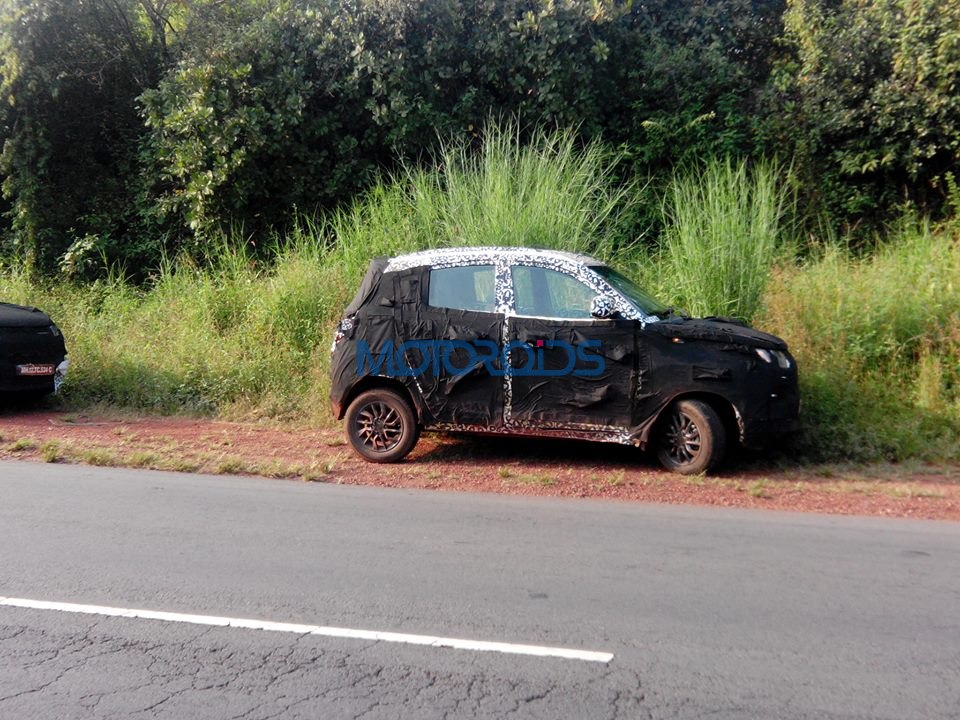 After giving us a glimpse of its interior through the recently snapped spy images, the S101 aka XUV100 has now revealed its exterior styling cues. Dressed in a new camouflage, sticking closer to its body, the Mahindra compact crossover bares its character lines and a whole bunch of other details. The spotted mule seems to be the top-spec variant with all the bells and whistles.

To start with, the new spy images reveal the design of alloys for the car, which has thus far been spotted only with steel rims. The 6×2 spoke design for the alloys looks nice, though the gap between the tyres and the wheel arches is still a tad too much for our liking.

Wrapped in a new printed green cling-on camouflage, the XUV100 finally comes out of the padded covers to show us some of its lines. Mahindra isn’t known for its design prowess, and going by the character lines on the new compact, we believe that perception isn’t going to change anytime soon

Starting with the front end, there seems to be a slightly curvy, deliberately left pronounced gap between the bonnet and the front fender as a styling cue. The shut-line carries on into the front door as a crease and vanishes halfway into its length. The front fender / wheel arch, though flared isn’t particularly sharp or angular. It’s somewhat bulbous, and the styling doesn’t go too well with the pronounced crease above it. 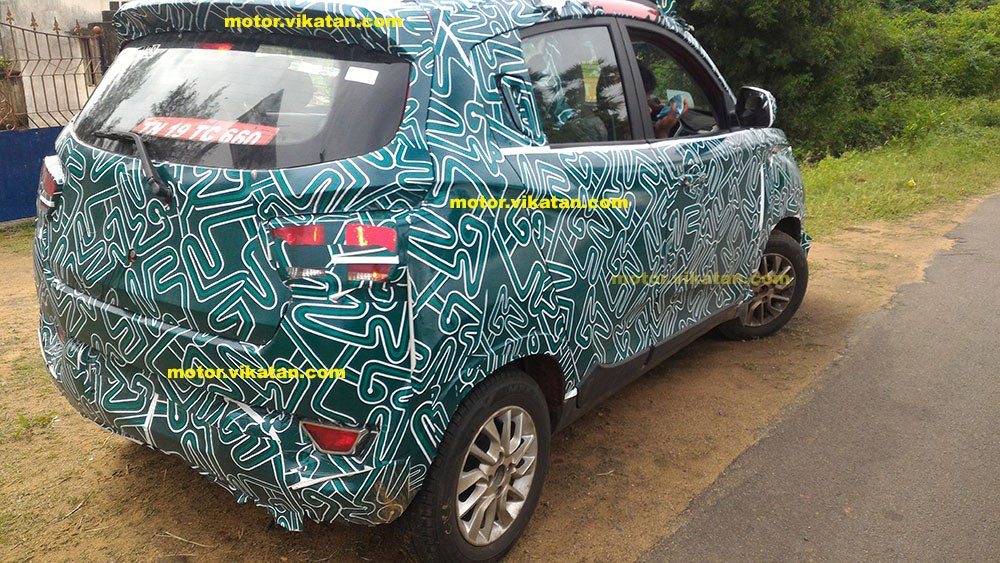 The lower area on the doors is scooped out with thick plastic cladding at the bottom of the doors and on the area around the door sills. A semicircular arch emanating from above the tail lamps and ending halfway into the rear doors is another important design detail. The rear bumper and the hatch door get horizontal lines which looks nice by itself, though not entirely in confluence with the rest of the design. There’s also a roof mounted spoiler to add an urban, sporty touch to the package.

The rear door gets a Chevrolet Beat like window panel mounted door handle, and black window frames. The ORVM, as we mentioned in our earlier report, too, is quite large and rectangular and is mounted in a relatively high position, hinting at a commanding driving position.

The XUV 100 / S101 will be powered by the 1.5 litre diesel that does duty on the TUV300 as well. There will also be an all new 1.2 liter petrol engine powering the urban compact crossover. In addition to a five-speed manual transmission, the XUv 100 is also expected to get an AMT

Upon launch, the new XUV100 will take the fight to a whole bunch of economy hatchbacks, and offer a SUV-ish presence for a very reasonable price.

Will it work? What’s your opinion on the car? Do let us know