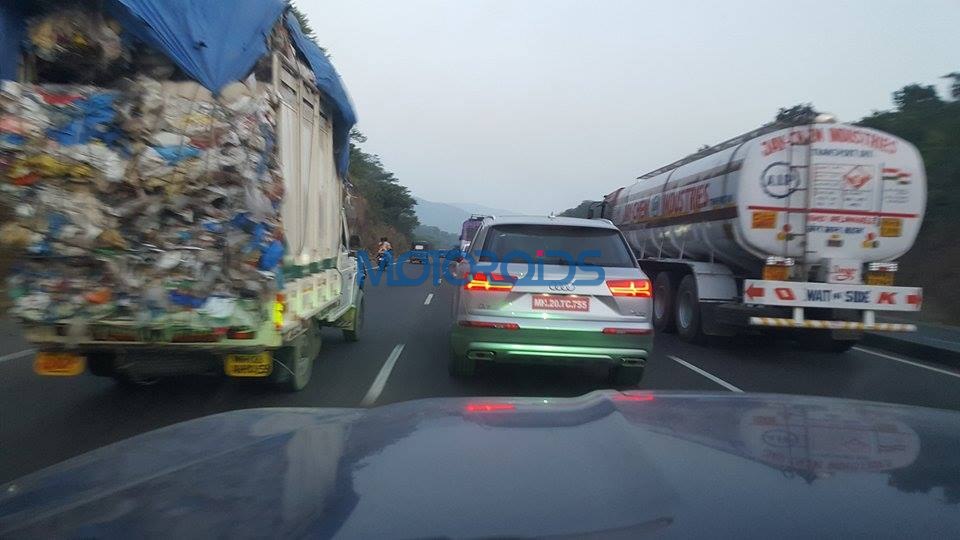 The next-generation, 2016 Audi Q7 has been spied in India, courtesy Motoroids reader Amit Lotlikar the car is expected to launch in India before the end of this calender year. Armed with evolutionary looks and a range of new and improved power-trains, the second generation Q7, built on a modified version of Audi’s MLB platform, will end up looking less bulky than its predecessor. In fact, it has undergone major weight loss of as much as 325 kgs, with the 3.0 TDI variant weighing in a 1,995 Kgs! Some 71kgs were shaved from the body, with the aluminum doors alone responsible for 24kgs. The front fenders, hood and tailgate are also made from aluminum, while another 100 kgs or so got cancelled in the light-weight chassis.

The completely new front fascia constitutes primarily of what Audi likes to describe as, a ‘3D-effect Singleframe’ grille housing a few slats, the four rings and the front registration plate- like on the new face-lifted Q3. While matrix LED headlights will be optional fare, the new Q7 will come with all LED headlamps as standard. The interior’s design is all-new and can be optionally equipped with Audi’s new 12.3-inch TFT instrument binnacle, a kick motion tailgate opener, the latest generation of the Audi MMI infotainment system with a 7-inch or 8.3-inch retractable display and a full touch surface, Bang & Olufsen Advanced Sound System and even Audi-branded tablets for the rear passengers. Apart from that, there’s a new four-spoke steering wheel and an unusually long HVAC louver that seems to stretch the entire length of the dashboard. 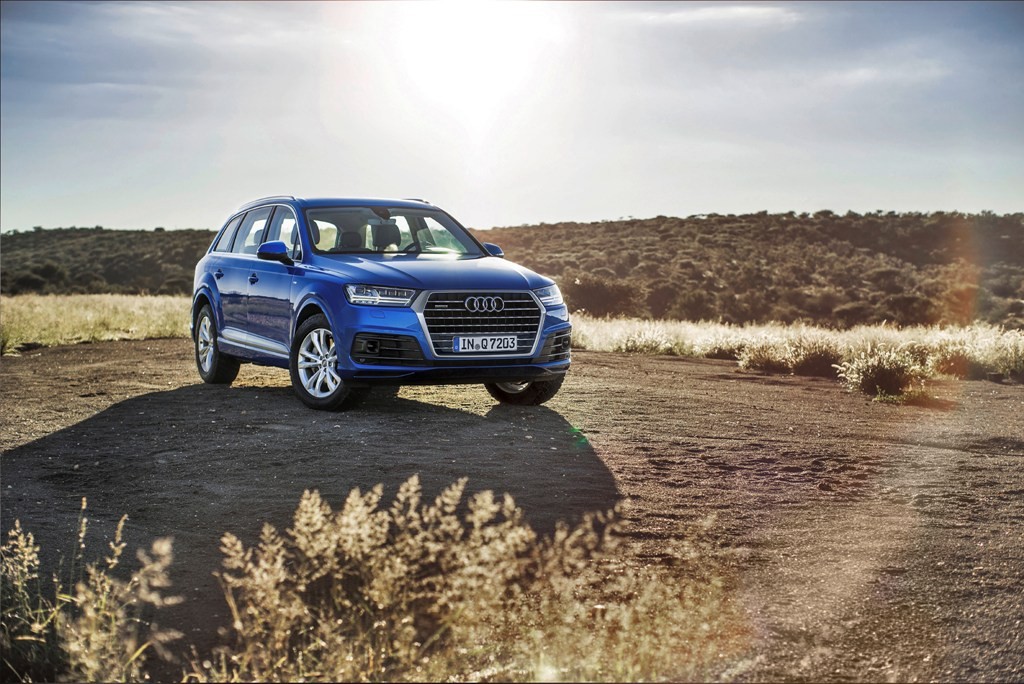 As with the outgoing model, the new Q7 has three rows of seats. The second and third second row can be folded down and tipped up. With all seven seats occupied, the Q7 has a boot capacity of 295 liters, while in five-seater configuration, there’s a commendable 890 liters of space, while with just two-seats, there’s a cavernous 2,075 liters at one’s disposal. In Europe, the new Q7 will launch with two V6 engines, the 268hp and 600Nm, 3.0-liter diesel that reaches 100km/h in 6.3 seconds, and the 328hp and 440Nm, 3.0-liter supercharged petrol that completes the 0-100 km/hr dash in 6.1 seconds. Both engines are mated to an 8-speed automatic transmission. And in a move that befits all that weigh loss, Audi will offer a 2.0-liter TFSI four-cylinder gasoline engine with 248hp and 370Nm of torque outside of Europe.

There will also be a more frugal, but less powerful 3.0 TDI Ultra diesel engine with 215hp and 500 Nm of torque. Coming along later in 2015 will be a plug-in hybrid version with quattro all-wheel drive system. Christened the Q7 e-tron, it will pair a 3.0-liter turbo diesel V6 with an electric motor integrated into the 8-speed tiptronic transmission producing a combined 368hp of power and 700Nm of torque. The lithium-ion batteries store 17.3 kWh of energy, endowing the Q7 e-tron with a range of up to 56 kilometers in pure electric mode, while allowing fro a brisk acceleration run of 0 to 100 km/h in just 6.0 seconds, and from 0 to 60 km/h in 6.1 seconds on electric power alone, with a top speed is 225 km/h (140mph). When using both power sources, the Q7 e-tron returns a combined figure of 1.7l/100km.

Expect us to bring you a detailed review of the new product in the coming weeks!

Head to the gallery below for more pictures of the 2016 Audi Q7: